What SaaS can learn from a company that boasts 150 million users, 1.5 million creators, and an estimated $2B+ in net revenue 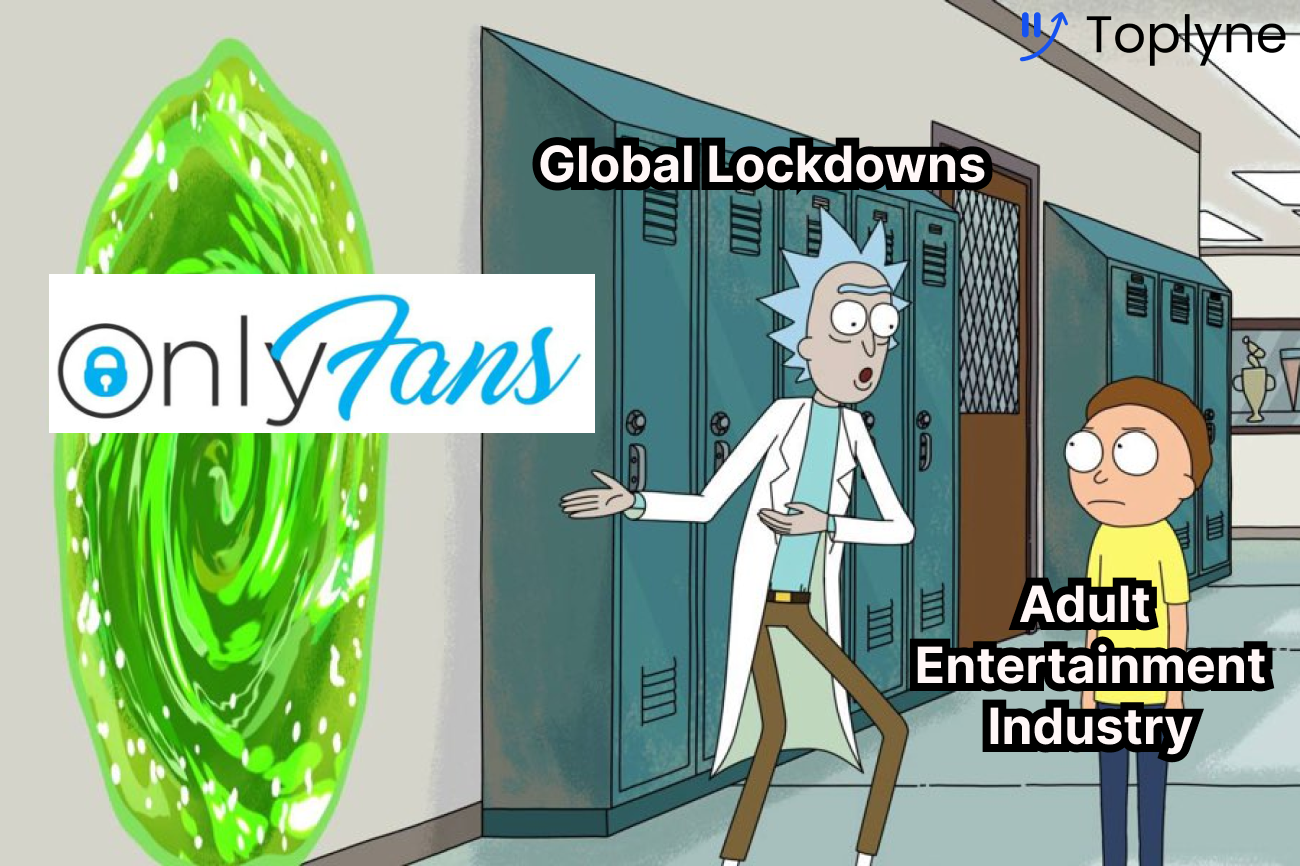 What SaaS can learn from a company that boasts 150 million users, 1.5 million creators, and an estimated $2B+ in net revenue

What do VHS tapes, Cable TV, the internet, and online cash transactions have in common?

The early market for VHS tapes wasn’t mainstream cinema and music videos. Cable TV didn’t become a staple of home entertainment because you could watch the latest Hitchcock film from your couch. The demand for internet bandwidth wasn’t driven by huge swathes of people trying to watch Tiger win his first Masters. And E-commerce transactions technology didn’t magically perfect itself overnight.

The crucial wave of early adoption in each of these cases (and more - anti-piracy legislation, online streaming, the list goes on) was driven by a behemoth that generates more revenue than the big three TV networks ABC, CBS, and NBC combined - the adult entertainment industry.

“Pornography exerts a disproportionate influence over technologies at the stage when they are new and glitchy and expensive and difficult to use,” says Patchen Barss, author of a book that covers the industry’s impact on mass communication.

In other words, if Big Tech invented it, the adult entertainment industry brought it to the masses.

“They create an initial market that allows them to develop to the point where they’re ready for the mainstream.”

If the adult entertainment industry has pioneered the cause of the bleeding edge of tech, this week, we turn to the bleeding of the bleeding edge itself for inspiration. To a giant that hides in plain sight, with a name that accurately characterizes our admiration for the way it has come to support 150M+ users and 1.5M creators: OnlyFans.

British entrepreneur Tim Stokely founded OnlyFans in 2016 with a £10,000 loan from his dad, Guy Stokely, who told him "Tim, this is going to be the last one."

Guy was, of course, referring to Tim’s previous forays into entrepreneurship, all three of which held crucial ingredients of the OnlyFans recipe, albeit in isolation and therefore failed.

1️⃣ GlamWorship - In 2011, Tim discovered a subreddit for a sexual fetish known as “financial domination”, where submissives paid huge amounts of money to dominant partners. After some initial signs of life as the connector of two parties, users found a way to circumvent the platform and found the burgeoning Twitter+Venmo mini-economy more convenient instead. GlamWorship went bust.

2️⃣ Customs4U - Stokely combined the original GlamWorship idea, and added a feature that he was getting a lot of requests for - the ability to request custom content from creators. Even though anyone could order or create content, requests for adult content dominated the platform. You see the idea for OnlyFans slowly emerge here, but the lowered barrier to entry for creators led to displeasure among the community who were hesitant to bring their followers to an already saturated marketplace. The world wasn’t ready.

3️⃣ 121with - Tim took a break from the adult content industry and turned now to a different, smaller niche, 121with was a service that connected tradespeople with users looking for expertise in domains ranging from plumbing and carpentry to real estate. The OnlyFans model of creator-fan relationships was starting to evolve in Tim’s mind, but the implementation was just in the wrong niche. This was OnlyFans but with actual ceiling fans. 121with folded.

OnlyFans launched in 2016, with a vision to give a platform to creators who were marginalized on every other social media platform.

"What if you could build a platform that works like these social platforms already out there but with a key difference being the payment button?” - Tim Stokely, founder

The thrice defeated founder now applied the deep understanding of creator-fan relationships he developed from his previous ventures to a community of creators who were struggling to find their feet on existing social media platforms.

A stroke of good luck 💫

Three years after launch, a bat shut down all live entertainment, and left all of us at home, forlorn, disconnected from reality, heartbroken, and deprived of entertainment. The adult performance industry’s wings had been all but clipped. You could cut the sexual tension with a butter knife. Live adult entertainment needed a savior, and OnlyFans was ready to step up.

By the end of 2020, the company had grown its revenue by an astonishing 540% to reach $400million. In 2021, they hit an estimated $1.2B in net revenue, and are expected to almost double that figure this year. Three-quarters of the company is owned by Leonid Radvinsky, a Chicago-based internet entrepreneur who along with Guy Stokely (Tim’s dad) serves as director. In December of last year, Stokely stepped down as CEO, and former Chief of Marketing and Communications, Amrapali Gan took over the reins.

Timing is often everything, and it has undoubtedly played a big role in OnlyFans' recent march into the mainstream. But it's only a small part of it. Upon closer examination, OnlyFans operates on a growth model that's transferable across industries and disciplines. Let's take a peek under the hood.

OnlyFans was able to onboard a large number of creators by offering a lucrative referral program that incentivized content creators to invite others from their social and professional circles. The program guaranteed a 5% cut up to $1M from the referred creator's earnings for anyone who refers others to the platform. There were no limits to the number of creators one can refer, nor the total referred earnings.

The referral program was a huge success. Bear in mind that whereas on Uber and Airbnb, making money is linear, on OnlyFans it is multiplicative. You can drive one car at a time and rent out a limited number of properties, but there's no theoretical upper limit on the number of people who will pay for a thirst trap. Early adopters of the platform raked in huge amounts in monthly referral bonus payouts and were happy to invite others from the industry to this gold rush.

Back in May 2020, Stokely announced that his platform was attracting 6,000 to 8,000 new creators, along with around 200,000 new users every day. It was around this time that the company implemented a 1-year expiration on referral bonuses.

A little help from the inside 📞

Going from 0 to 1 is often a story of brute force. After the website launched, Stokely recruited someone who knew the inner workings of the adult industry to recruit adult performers and onboard them to the platform early on: Webmaster and videographer Bill Fox.

“The English guys didn’t know the adult industry; Bill was the gatekeeper and got their name out there and got people to sign up,” says Brad Armstrong, who has starred in 200+ adult movies

In providing a platform for marginalized content, OnlyFans did well to leverage creators' existing social media presence and following.

Creators who went live on Fanscope automatically triggered tweets to their followers, who were then required to follow them on OnlyFans to continue engaging with the content.

Instagram and Snapchat are virtually OnlyFans free tiers for creators, who are able to bring move their massive social media following at will from platform to platform, the best example of which played out in August 2020, when former Disney star Bella Thorne made a $1M in one day after signing up, by leveraging all of her 20M+ Instagram following.

OnlyFans was conceptualized as influencer culture on steroids. For live entertainers, OnlyFans helped avert the dangers of a live workplace and often cut the middle-man to establish a direct line with their customers.

"I saw how much brands were making off influencers, and I thought, what if there was an even simpler way for these creators to get paid" - Tim Stokely

To date, OnlyFans has paid out over $5B to creators on the platform. At a minimum subscription price of $4.99 per month and the maximum subscription price of $49.99 per month, along with a free tier, the platform pays out 80% of the money earned and keeps 20% of the earning as a fee. Compare this to most Webcam sites that take ~7o% of a creator's earnings, and it becomes clear why the OnlyFans proposition was hard to refuse.

“I like that it only takes 20%, which is much lower than the prior industry standard of a 50% minimum,” says Aella Jones, a former pastor-turned adult entertainer

Creators can charge for individual content, direct messages, and specialized content such as custom video messages. The platform allows for pay-per-view content and tips on top of the subscription fee. In a post-pandemic world where the sex economy was one of the hardest hit by global lockdowns, OnlyFans not only gave a platform for creators to thrive, but also total autonomy over their content, customer base, and prices.

The rise of OnlyFans consultants 💸

The revenue generated on the platform follows a power-law distribution with the top 1% making nearly 30% of all the money, and the top 10% making around 70%.

While popular influencers take home large amounts, the vast majority are still spreading their wings and finding their feet on the platform. In classic "sell shovels at a gold rush" fashion, this highly competitive landscape has presented an opportunity for consulting agencies, marketers, SEO consultants, data scientists, marketing freelancers on Fiverr, and promotional platforms to thrive.

While by the end of 2020, OnlyFans was averaging around 500,000 new users per day, retention rates when it comes to adult content tend to be low (~50%), implying the need to reach new users all the time.

The rise of an entire economy of consultants around OnlyFans empowers creators even further and strengthens the platform's position, in the face of competition from such competitors as Fansly.

What's next for OnlyFans? ⏭

Late 2021 saw the British company try to distance itself from adult content. They announced the launch of OFTV, a safe-for-work app that features yoga routines, cooking tutorials, etc. In an attempt to improve relationships with banks that were blocking intermediary payments, they announced a ban on adult content on the website - a move that was quickly rolled back after receiving serious backlash from the creator community.

Still not VC backed, OnlyFans is still highly profitable and thought to be in the market for "strategic partners", at a valuation of $1B+. With the launch of a "Creative Fund" for musicians, and a spotlight cast on "rising stars", the increasing focus on SFW creators and content is clear. With celebrities like CardiB, Floyd Mayweather signing up, and an increasing variety of SFW content, OnlyFans is also beginning to lean into stand-up comedy, tarot readings, DJing, Gaming, and more.

As with VHS tapes and CableTV, the adult entertainment industry paved the way, and the rest followed.