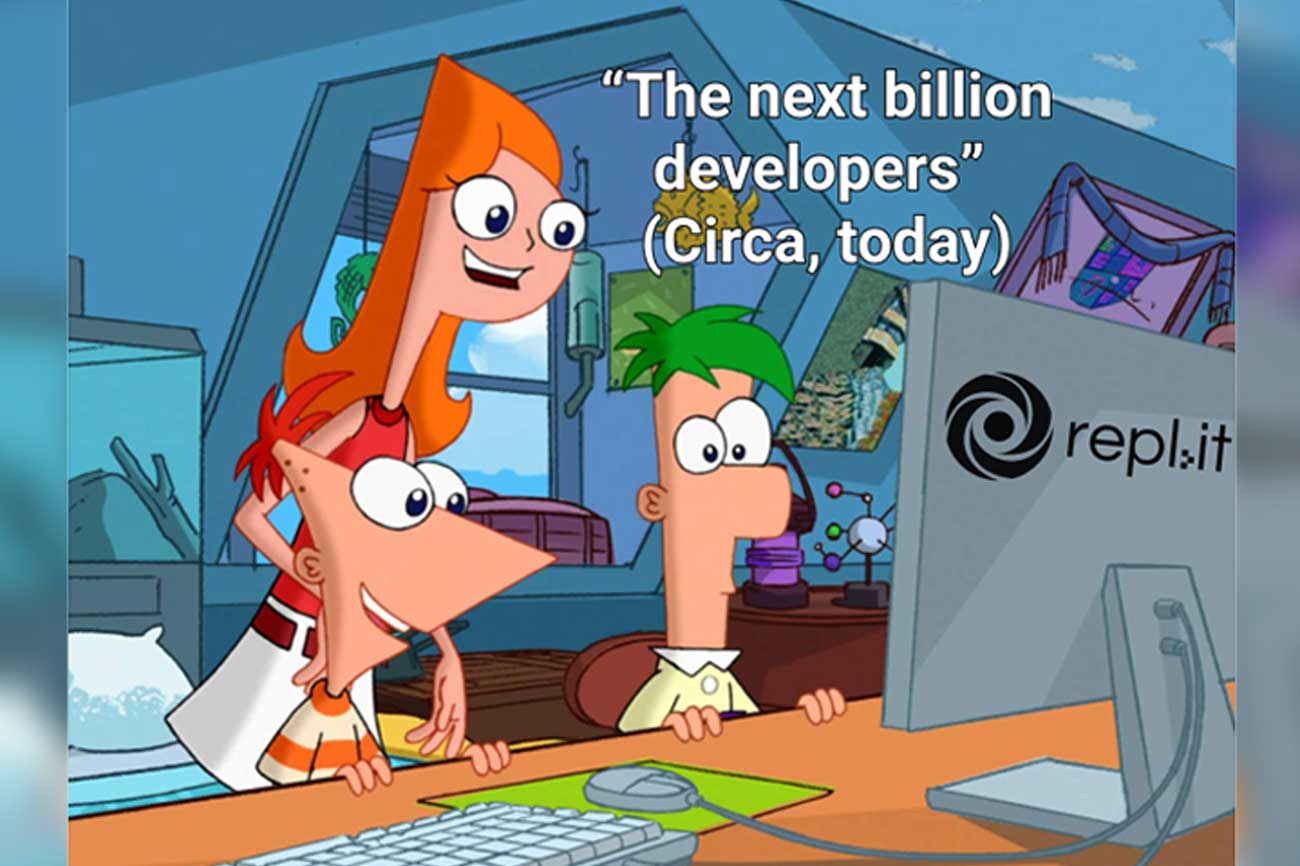 The inventor of the printing press, Johannes Gutenberg, died in 1468, penniless with creditors at the door to impound his presses.

Two centuries after Gutenberg's death, Francis Bacon called the penniless inventor's printing press one of "Three Great Inventions" that have altered the face and state of the world along with gunpowder and the nautical compass.

What had changed in just two centuries?

Although the creditors who knocked on Gutenberg's door found no use for his invention, their children and their children's children would go on to learn how to read, spread their ideas to the world, stand up to tyranny, and spearhead revolutions all thanks to the printing press. It took an entire generation to grow up with the Gutenberg press for its true power to be unleashed to the world.

With the barriers to entry for software creation lower than ever, we are at the cusp of a Gutenberg moment ourselves. Widespread code literacy has the transformative power to decentralize tech power, localize software creation, transform education, democratize institutions and distribute wealth. All it might take is for an entire generation to grow up with the power to create software and unleash it to the world.

The next billion software creators will soon discover the magic of code and there's a very good chance that they will write their first lines of code in Replit.

🤝 The Figma for coding

Remember how Figma changed designing for good when they brought it to the browser and introduced multiplayer design? If yes, here's a déjà vu alert! 🚨

The motivation for Replit's first version can be traced back to the setup - code - pay - repeat loop that co-founder and Jordanian Amjad Masad had to go through every time he wanted to tinker with a new programming language at the local internet cafe (remember those?). This personal experience, in addition to teaching our protagonist the virtue of patience, also surfaced the need for a better way to code.

The solution was to host the dynamic Read-Eval-Print-Loop (REPL 🤔) programming environment. Translation?

A simple interactive computer programming environment that takes single user inputs, executes them, and returns the result to the user on the browser.

The open-source project developed along with co-founders Max Shawabkeh and Haya Odeh was discovered by US coding education startup Codeacademy, the founders of which immediately flew to Jordan to recruit Amjad as a founding engineer. After two years in New York with Codeacademy and another two and a half in Facebook's React native team, Amjad and Haya circled back to their mission of making coding more accessible - because well, someone had to! 🦸🏻‍♂️

I'd been waiting for someone to start this startup for years -- a website where people can not only learn how to code but can also build, collaborate with others, and ship software. - Amjad

Today, Replit is an In-browser IDE (Integrated development engine) used by 10M + developers 🤯, that supports 50+ programming languages, multiplayer development across devices, and push-button deployment and hosting - a product that delivers the promised land where anyone could learn and ship code. In the process, Replit built an $800M rocketship, raising capital from marquee investors like Coatue, A16Z, A.Capital, Ycombinator, and Celebrity Angels like Paul Graham and Peter Thiel… all while effortlessly being gangsta 😎 (read tweet)

Turned down a $1b cap term sheet.

Don’t feel like a unicorn yet, and folks joining us today will share the glory of getting there.

How does this relevant but simple product compare to incumbent software development infrastructure offered by tech behemoths like Microsoft & Amazon? The simple answer is that it doesn't. But hey, who's competing? 🤷🏻‍♂️

A close inspection of Replit's user base and product positioning reveals a strategic masterclass playing the long game. The product has 5M+ users who are under 18 and are using the product not to ship features for their employer but to explore and hack their way into the limitless possibilities of software.

To quote Packy McCormick (now an investor in Replit 🙌🏻) - “Replit positions itself as the first place that anyone writes a line of code.”

That’s powerful! Just compare that to Twilio. A $46B business created on a community of (lo and behold) ~5M developers. It’s not unfair to say that Replit with its large and young user base, already has the captive audience it needs to create the next legendary devtools company of the future.

This is awesome -- it gives meaning to our work. Providing a community for young hackers is as important as the tool itself.

This is also why our growth is invisible to haughty professionals leading to some skepticism whenever we announce any numbers. pic.twitter.com/lyDK4kj9wg

Landing early into the computing workflows of this young population (re: the future), all Replit would have to figure out for coding domination would be to grow with them, ensuring at every juncture that all their needs are met by the platform. But before we get to that, let's explore some acquisition strategies that Replit employs to "catch them young":

👨🏻‍🏫 School: One of Replit's earliest sources of revenue was a packaged version of the tool that schools could run their coding classes and evaluation tests on. The offering, earlier called Classrooms was later renamed as Teams for Education and is an enterprise offering that can be purchased at a class (free for 4 months - PLG ⭐️)/organization scale and is a one-stop-shop for collaborative browser-based programming learning at schools and even colleges (including UCB and MIT). Apart from ticking the cash register, Teams for Education introduces Replit to a huge community of young coders who would hack around the platform and learn outside of their curriculums.

📚 Learning resources: Your school didn't sign up for Replit? While you should definitely fire up your folks for the next PTO, one can easily boot up their personal computers/mobile devices and learn a new programming language on the platform. Interested young hackers can also fork and remix existing apps/templates and in true Roblox fashion, can publish their creation to the broader platform. AI-assisted coding is another Replit feature that breaks barriers in initiating a new developer.

💥 Kaboom!: Kaboom.js is Replit's javascript game creation library, using which kids can program, ship, and share their own games. This behavior is further nurtured through events like gaming hackathon 'Kajam' at whose first version, @havana24's kaboom-made game 'Heliumphant' walked away with $10,000!

A quick glance at Replit's apps/websites created charts reveals nothing short of a rocketship! 🤩 🚀

Replit today has 10M+ registered users who have created 20M+ websites/apps via the platform. The company has grown 300% YoY on users and 1000% YoY on MRR which it mainly generates through its freemium hackers plan and also from the enterprise 'teams for education' offering.

The product continues to grow to encompass the growing needs of a maturing user base, and this demand for product development is being met through rapid headcount expansions to build, build, build. The 2 member founding team has 20xed to 40+ (with a 250% YoY growth), and 65% of this team works on product and engineering. Replit's organic growth trajectory was almost exclusively product-led employing an experiment-first growth model led by Tabish Gilani (ex Growth PM), while Patrick Coleman (VP ops) and Brittany Pirkle (Educational partnerships) led sales efforts for the enterprise offering. A community team comprising of Lena Vu Sawyer and Piero Maddaleni, engages the 10M+ community via Replit Talks and other community forums while YK Sugi manages the team’s content efforts (love the YT channel❤️).

We just broke a perfect exponential 🙈

🙏 May I have your retention, please

Having successfully and meaningfully acquired a large number of underserved young developers, Replit is positioned to be a powerhouse for software creation in the future... provided they crack the 'Retention' code!

The solution in its most fundamental sense, is very simple : Provide enough value to your young and maturing user base, enough so that they wont have to look for it elsewhere.

How can Replit achieve this?

📈 Growing functionality - A focused product roadmap building on Nix (for opening up more packages to use on the platform) for scale, ships out features, and where necessary, Replit partners with 3rd parties to improve user experience. Partnership with OpenAI's Codex to bring in Assisted coding and adding Solidity -the programming language used to create Ethereum smart contracts are instances of Replit growing the product to meet user requirements.

🏘 Building a Community - A community of 3M+ coders sticks around to help their peers, building an online camaraderie. Open source augmented by real-time collaboration extends Replit into the social and personal networks of its users.

🏗 Becoming a platform - In addition to providing the user with the infrastructure to learn and ship products with primitive tools, platform features like the Apps marketplace hosting user-created APIs and plugins allow for the Replit community and userbase to build for themselves and to share their creation.

🤑 Incentivising platform contributions - In addition to enhancing the possibilities of the platform, these software and tooling contributions can also be monetized by the user.

On the back of their Series B earlier this month, the team plans to invest in three key areas:

The announcement of the 'Solidity' development template underscores Replit's intentions to future-proof this mission. Web 2.0 or 3.0: Replit's got you covered.