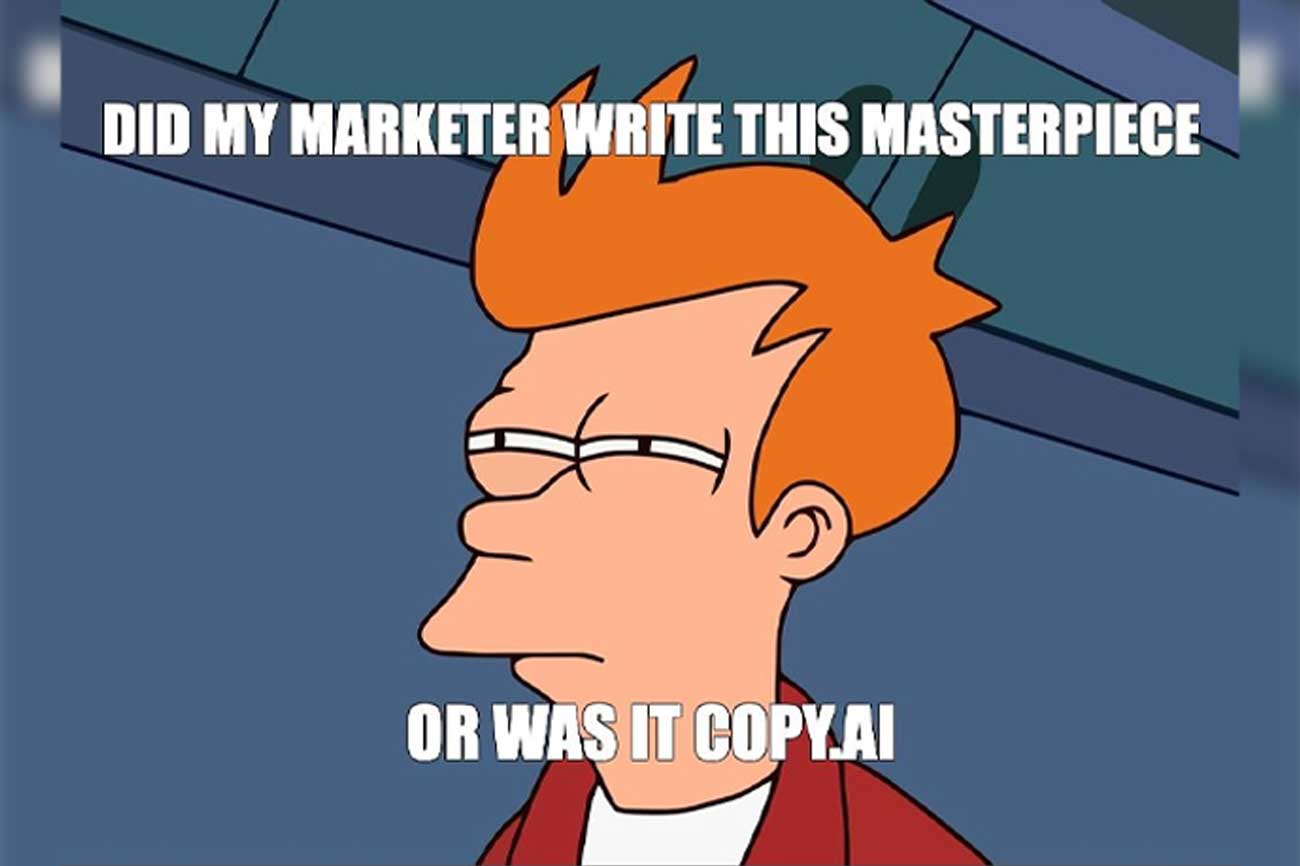 We’re only seven years away from 2029 - the year the Terminator will be sent back in time to eliminate Sarah Connor, whose unborn baby is mankind’s savior in the battle against a hostile AI.

Hollywood’s obsession with post-apocalyptic dystopia has long dominated the mainstream narrative around artificial intelligence. Movie plots need conflict to function and it is convenient to bake in elements of rising action and resolution when AI is cast as the supervillain with an agenda to end the human race.

But imagine a different narrative: A human-centric Artificial Intelligence that improves human productivity and creative potential in leaps and bounds; AI that helps people start their businesses from anywhere in the world to constantly and continuously improve our lives.

Today, there are around 300 million entrepreneurs in the world. Imagine the technological renaissance that is possible in a world where AI lowers the barriers to entry of entrepreneurship, so the next billion entrepreneurs can start their own ventures. This is the kind of narrative we’re unlikely to see in a Hollywood movie.

But in CopyAI, we caught a glimpse of this Utopia.

🤖 The magic of OpenAI's GPT3

Entrepreneurship junkies Paul Yacoubian and Chris Lu both worked together for five years at the ESO fund before starting CopyAI, where they had a chance to observe silicon valley start-ups at very close quarters and with a fine-toothed comb.

Both of them turned to angel-investing and very quickly started toying with their own side-hustles. Elements of their early projects can still be found on CopyAI, although they've morphed into something vastly more powerful today.

"Can you do more than just taglines?"

Each time Paul & Chris set up a new side-hustle, their software stack of product-led growth (PLG) companies that included Figma, Webflow, Notion, Stripe, and Slack ensured that they were able to iterate the app itself, but to their frustration found that the most time was spent writing marketing copy. Having found a real audience that was finding their GPT3-powered tagline generator useful, the duo set out to build a tool that can generate more than just taglines.

They started adding more use-cases to the tool and were about to make two of the biggest decisions in the life of the company so far:

One - They found out that the domain name copy.ai was available for $5k

“I was like, whipping my credit card out because this is an amazing domain name. So of all the things we’ve done, so far, that decision has been the biggest competitive advantage we’ve had—[literally] just the name of the site.” - Paul Yacoubian

Over the next few days, along with the help of designer extraordinaire Alex Banaga, they set up Copy.ai's landing page. Copy.ai was now live - a GPT3-based tool that churns out marketing copies of different tones, based on a brief description that's plugged into the tool.

Two - They launched with a bang.

On October 15, 2020, Paul Yacoubian hit send on a tweet that unveiled CopyAI to the world.

12 months since @chris__lu and I earned our first dollar of revenue online! pic.twitter.com/5QCWsrQLtx

What followed was a sight to behold. In the next year, this tweet alone would get over 280k impressions, 7k website visits, 2k signups, and their first set of paying customers. Even without advertising, the tweet was reaching ~200 people a day months later. With their free trial/no beta/no credit card model, they were catching rare waves of democratization at a time of peak-Clubhouse mania, when access to products was starting to feel exclusive.

They immediately raised $600k, quit their jobs, and dived into CopyAI, a company they decided from early on to build in public.

The tweet spread like wildfire and gave them a lot of early traction. Curiously, not long after Paul hit send on that tweet, Twitter went down for a few hours. In what may have been a blessing in disguise, they managed to get impressions from people returning to the platform and those of us who refresh our feeds constantly during outages. You know who you are.

Create momentum for your business to accelerate. Ask friends to help you share and retweet. We got 200k impressions, 7k website visits, and 2k signups! pic.twitter.com/fod1jVvuRm

After launch, CopyAI's MRR grew on the back of the viral launch tweet, in hockey-stick fashion. They closed 2020 with ~100%MRR growth month-over-month and soon hit $40K MRR, barely four months after launching.

The momentum continued through the year, leading to a series A raise in December 2021, following a $2.9M seed round announced in March. In the first year after launch, around 380,000 people had used CopyAI to create marketing copy for their businesses, allowing the company to reach $2.4M ARR from over 5,000 paying customers in 50 countries. In typical PLG (Product-led Growth) fashion, there are a few things that Copy.ai did right early on to improve the end-user experience, and ultimately retention and conversion to paid plans.

The best PLG companies deliver value to the user straight away and take them to the magical "A-ha!" moment without a fuss. It only takes a couple of clicks to start creating copy on the tool. Once you key in a title, a relevant website, your product's name (our content team took to Copy.ai to test out copies for Toplyne) along with a brief description ("helps revenue teams at product-led companies increase conversion rates"), and the desired tone of the copy (we went for "friendly" - this is temporary, of course), the AI works its magic and spits out sample copies that you can either use as-is or as inspiration for other ideas.

Here's the copy it generated for us, all within minutes of signing up for a free plan:

Toplyne is designed for sales and revenue teams to increase conversion rates by focusing on the right leads at the right time. It works by analyzing inbound leads, then placing them into segments – all with a click of a button. This lets sales people target the segments they want while being able to avoid wasting time on the ones they don't.

The price is just right

Chris Lu says that the best advice he got in the early days was to set up a yearly pricing plan. This not only reduced churn but gave them cash upfront to reinvest into the product. From launching with around 10 tools in October 2020, the platform now offers ~100 tools. The team also offered extended free trials to students and "free on the weekends" plans to support the side-hustlers.

Our customers are mostly small businesses and entrepreneurs. The founder/owner is usually both the end-user and decision-maker. - Chris Lu

In December 2021, they launched a free plan with limits on credits per month, further encouraging users to discover the value of the tool themselves before deciding to upgrade - the product-led growth ethos.

"Our go-to-market strategy has revolved around generating inbound interest by "Building in Public" on Twitter. Our goal is to teach and inspire more entrepreneurs and show people a path to starting their own company and a path to a better future." - Chris Lu

Building in public enabled the team to hire for open positions, build trust within the community as individuals and as a product: which ultimately led to inbound leads and revenue.

😸 A community of CopyAI Cats!

In April 2021, CopyAI added Diana Morgan to the team as Head of Community, highlighting a commitment to building a strong community around the core product.

💻 Building a community on Facebook - After the initial buzz of the launch wore down, CopyAI's word-of-mouth engine kept humming along with the founders leading the charge on Twitter and an active community engagement on the side. The official Facebook group of engaged users is around 7.5K strong and growing every day.

📖 A pointed content strategy - In December 2021, the team launched a blog on their website with content that speaks to their distinct user personas and ties back to copy.ai in a unique way - a page that is taken from Canva's content strategy, which at its best connected "Why you should take long walks" to a design use case.

🏏 Swinging for the fences

In December 2021, the team raised $11M in Series A funding from Wing Ventures, Craft Ventures, Sequoia, Tiger Global, and Elad Gil. Yacoubian says that with this funding, they will look to double their team of ~20 by the end of 2022.

The founders are optimistic about the democratization of AI and maintain that we've only scratched the surface of what's possible with AI on our side.

Imagine a world where we have 1 Billion entrepreneurs roam the earth. Pretty soon, you may not have to.‌
‌‌