From being great story-tellers to delivering value fast and leveraging product qualified leads (PQLs), the best PLG companies are a cut above the rest 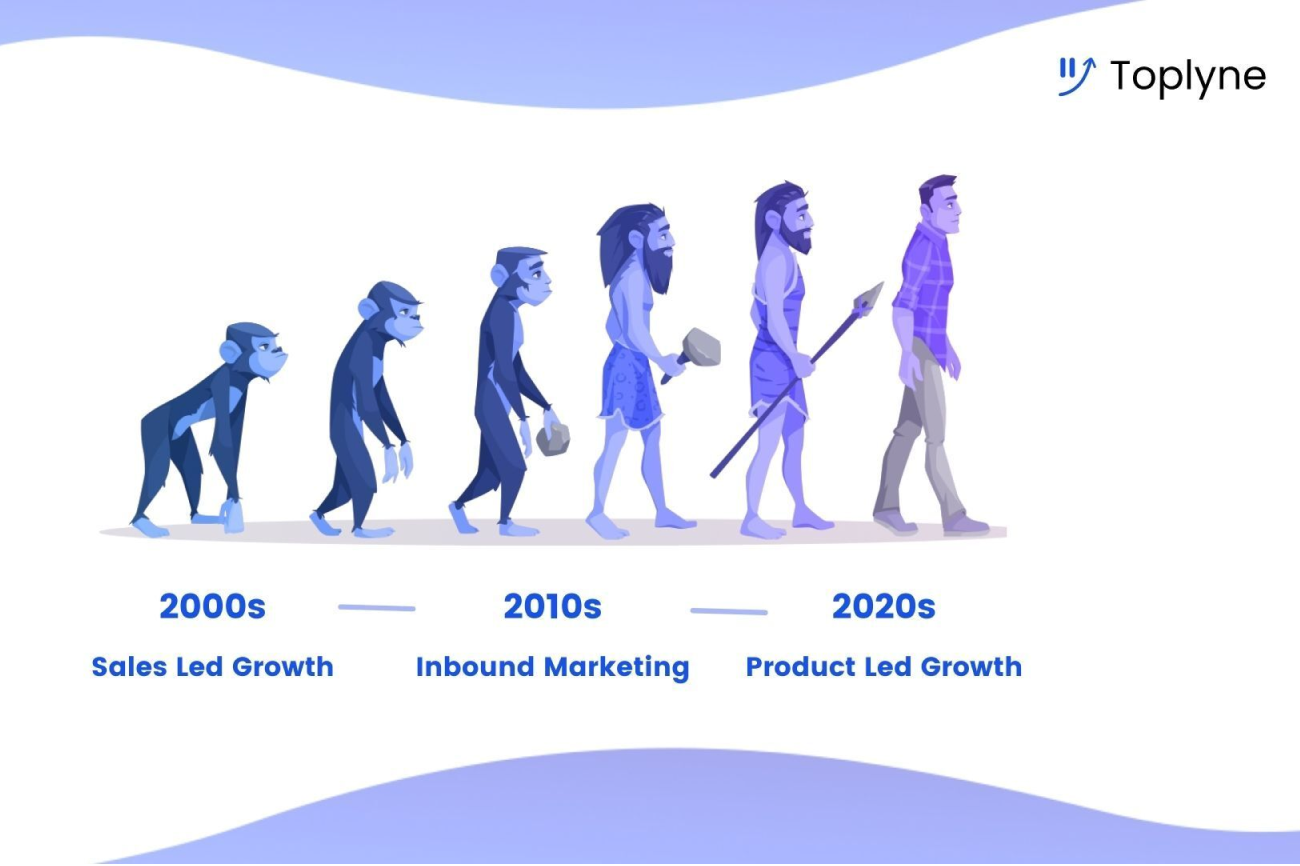 From being great story-tellers to delivering value fast and leveraging product qualified leads (PQLs), the best PLG companies are a cut above the rest

A dimly lit steakhouse. Enter a salesperson, engrossed in conversation with a CXO. There’s a limo parked outside.

In the early 2000s, the SaaS go-to-market motion was entirely sales-led. It made sense to carve out a budget for your sales teams to wine and dine CXOs of potential customers because that was the only way large enterprise accounts were going to find out about your hot new product. The protagonist of the story was sales. Supporting actors were unheard of.

Act 2: The early 2010s and the evolution of inbound marketing

It is a decade later and Sales, by now a veteran name in the industry has stepped aside to let a protege take the lead, and a very capable one at that. Enter Marketing, to loud music and confetti everywhere.

The 2010s saw the sales-led motions evolve to inbound marketing where focused, targeted campaigns replaced steak dinners and top-golf and widened the top of the funnel (ToFu), paving the way for Marketing Qualified Leads (MQLs) to be handed over to Sales. And as for good ol' Sales, the supporting act meant more potential buyers reaching out to them, and in turn, more conversions 🚀

We live in the era of product-led growth. Whether it means creating top of the funnel (ToFu) through virality, guiding users through their activation and engagement journeys, or taking the first steps in an assisted sale, at product led growth companies, the product is the lead actor, and sales, marketing, and engineering are the supporting cast.

For those in the audience paying attention, this should come as no surprise. The continuing trend of a closing gap between the buyers and sellers of software was always going to result in both ultimately coming together. The era of the top-down determination of which software teams used left no room for experimentation among end-users and sometimes resulted in 7-figure software gathering dust on shelves.

There are evolutions and then, there are revolutions.

In the wake of Covid-19, we witnessed two years' worth of digital transformation in just two months. Every company is now becoming a software company, and a million applications are just a few clicks away. In a world where anyone can take your software for a spin, end-user adoption and retention are functions of how much value your application can deliver over your competition.

And in the rainforest, only the very best survive.

Product led growth emerged as a Darwinian alternative mirroring survival in the wild. A low-risk environment where teams discovered and experimented with software was always likely to forge resilient strains of the product. Only the best emerge from the crucible because they provide the best experiences to the end-user. Coupled with Sales & Marketing becoming way more expensive than ever before, it only made sense for the product to become the protagonist, and for Sales and Marketing to step into supporting roles.

A self-serve product is no longer a nice-to-have. It is an existential need.

There are only two kinds of SaaS companies in the world today:

Product Led Growth (PLG) is the natural next step in an evolution that's been playing out for decades. And as for the other millions of software companies that are yet to be born into this world, the ink is dry on the product being the driver of growth.

What separates the best from the rest

How do you spot the best Product Led Growth companies in the wild? Canva, Figma, Notion, Calendly. What seperates them from the rest of the pack?

Imagine running an algorithm to adapt your product to optimize for end-user delight, and imagine all your competitors doing the same thing. In this highly competitive space where the margins are so thin, the clear winners are those who go the extra mile.

But what does that extra mile look like? Over the last year, we've spoken with 100s of PLG companies - all the way from seed stage to public market giants. And after all those conversations, our pattern matching spidey senses were tingling ✨

In classic McKinsey fashion - the following are the top 3 characteristics that separate the best from the rest!

Imagine yourself as a young PLG company. You're up against the giants. The behemoths. You're up against Amazon! You need to convince merchants that your buggy little tool that helps them create e-commerce stores online is the solution to all their problems. It's going to change their lives.

They ask you why they should believe you? You have no customer references, no reviews and Amazon works well enough.

The way the best PLG companies approach this problem is step 1 to why they succeed. They appeal to their customer's emotion. Their core drivers. A merchant on Amazon often feels constrained to the fate the overlords have planned for him or her.

And those are exactly the heartstrings a young Canadian startup called Shopify tugged on in its early days. It promised its customers independence!

Shopify - “We help people achieve independence by making it easier to start, run, and grow a business.” Shopify’s mission appeals to the indie spirit and freedom from being under someone else’s thumb. (looking at you, Spotify 😒)

Stripe - "Our mission is to increase the GDP of the internet." In typical Patrick Collison fashion, Stripe appealed to the DNA of every young Silicon Valley founder building an online business.

Clockwise - “Help the world make time for what matters.” It's easy to take Clockwise's impact on your calendar for granted. But their mission is a stark reminder of the impact this glorious little Chrome extension can have on our lives.

Sourcegraph - "...to make it so everyone can code, we will create tools, networks, and incentives for coding at ever-larger scale." While 'code-search' is a succinct way to describe Sourcegraph to a developer, their mission applies to all.

Postman - Postman's founders have said often that their long-term vision is to add "net new developers" to the world.

Airtable - "Our mission is to democratize software creation by enabling anyone to build the tools that meet their needs." Airtable's vision is much more grandiose than to just be the spiritual successor to MS Excel.

Canva - "...with a mission to empower everyone in the world to design anything and publish anywhere." Canva's narrative is the democratization of design.

The attention economy is a zero-sum game of time

In the attention economy, every product is competing with some other product for end-user attention and those who can deliver value without beating around the bush stand to pull ahead of the pack.

Here's an example: How much time do you think it takes to build a Christmas card on Canva?

Well, we timed it. Even without an account, it takes all of 52 seconds 🤯 to fire up the website, find a template, customize it, and export it to your desktop.

Canva - From discovery to design to value in 52 seconds! ⚡️

However, not all tools can deliver value in 52 seconds. And that's totally okay! Some inherently serve more complex use cases than Canva, but even then, product led growth companies guarantee that the outcome is made visible to the end-user within minutes of discovering the product. This is typically done through template galleries. Be it Algolia, Airtable, Retool, or Notion, at no point does the end-user have to engage in mental gymnastics to imagine the value proposition.

Case in point: Here's Notion's standard template gallery. The decision to create a user-generated (UGC) templated gallery was notably the inflection in Notion's journey from growing fast to growing at a breakneck clip!

Sometimes, the amount of time it takes for a product to deliver value is high by design. Consider Clockwise, where the value proposition is time itself. How do you deliver value fast? Clockwise does this in two ways:

Scientifically expressed, a PQL or a Product-Qualified Lead can be thought of as a segment of personas who performed a set of actions a certain number of times in a certain amount of time

PQL definitions can vary based on the nature of the product, but at its core, it remains a function of a combination of persona, actions fired, # of times, and time period. PQLs are typically derived from a mix of product signals, demographic signals (country, size of company, industry, etc.), and technographic signals (software stack used).

For Figma, the product-usage signals considered for PQLs are a mix of activation events like creating components, inviting colleagues, exporting designs, etc., or propensity-to-pay-events like hitting the paywall, checking the pricing page.

Whereas, for Hopin the product-usage signals are instead # meetings created, # of concurrent meeting attendees, # of integrations used, # of features used, # of referrals sent, etc.

Okay so PQLs are the answer to all our problems, right? Wellllll... we've not been entirely honest with you. While PQLs are easy to conceptualize, they're notoriously hard to implement 😬

Enter the (complex) infrastructure that enables the best PLG companies

In the fast-paced, data-backed world of PLG, implementation of PQLs is where most companies falter. At over 95% of the companies we spoke with, the "PQL implementation project" was lost to a spider web 🕸 that can only be described as DIY hell! 👹 A chaotic criss cross of spreadsheets, CRMs, product usage information held together by a disparate set of Excel or Google Sheet files... yikes!

But the OGs of the PLG world like Slack, Asana, Shopify, and Figma didn't live in this hell!

These companies have gone the extra mile and have created an intricate infrastructure of engineering and data science, to implement and operationalize PQLs!

In an ideal world, every Product-Led Growth company has the internal capabilities, the bandwidth, and the resources to set up a flow where a data science team defines PQLs in tandem with a data engineering + platform engineering team that funnels data from Billing, CRMs, Marketing, and Product Analytics databases while simultaneously streamlining the whole process to funnel the leads back into the CRMs.

But the world is far from ideal, and not every company is as far along in its PLG journey as Slack, Asana, Shopify, or Figma.

One tool to rule them all

With tech transformation stepping into high gear in the wake of the pandemic and the clairvoyance that product-led growth is the way forward, most SaaS companies will be PLG companies and what's more... most of them are yet to be born into this world.

We built Toplyne to take this daunting task off the hands of companies who face the dilemma of massive top-of-funnel growth coupled with the inability to set up this massive infrastructure. Infrastructure that is indispensable to converting users from free to paid plans.

Setting up something similar to the scary stack  shown here is a nightmare for a young PLG company, but all of this heavy lifting just sounds like Toplyne... with extra steps. 😉

Here is a list of ~300 companies that have been pioneers of the product-led movement.