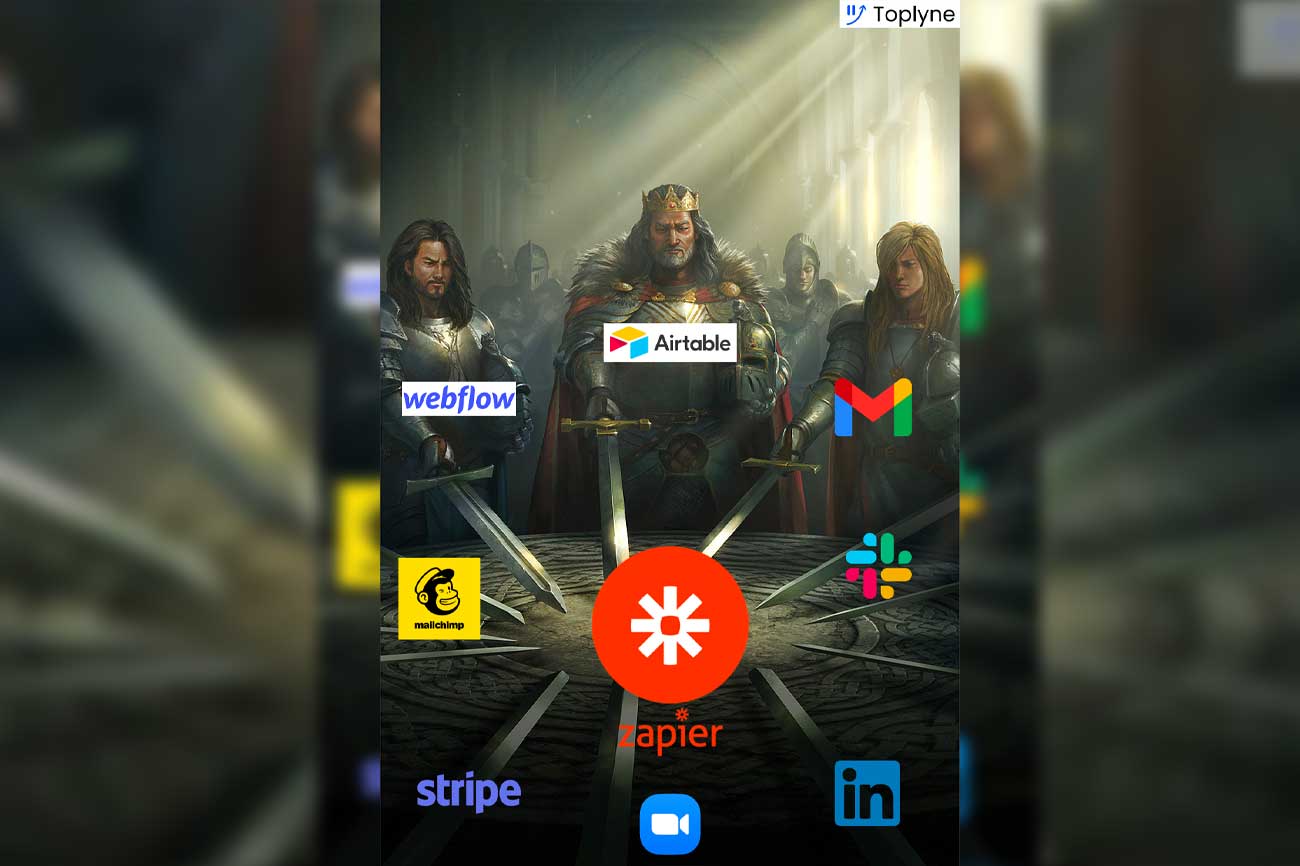 The product-led growth engine that powered Zapier's growth from $0-$140M ARR and a $5B valuation with just $1.4M raised

Microphones plugged into the mixing console.

Power drops running down either side of the stage with speakers, subwoofers and the rest of the sound system plugged in. Audio connections from the mixers to the main speakers? Check. Volume levels: good.

Time to curtains at the Teatro dell'Arte, Milan, Italy: 30 minutes.

The Miles Davis quintet are about to go on stage.

As the sound of Miles' trumpet fills the room, and 24-year-old Herbie Hancock's piano notes light up the theater, recording engineer Rudy Van Gelder affords himself a smile behind the console. Powering the magic being created in the room was a series of analog connections, that quietly hummed along and did their job exactly as Rudy intended them to.

There's very little that's magical about a set of wires powering a Miles Davis concert, or to generalize, the infrastructure powering so much of what is magical about the devices and software we sometimes take for granted today. But humming along and doing their jobs exactly as their creators intended to do, is a series of very boring wiring and automations that ultimately animate the end-user experience.

Like Rudy Van Gelder in Milan back in 1962, Wade Foster can afford himself a smile today knowing that a lot of the magic that software enables for us today is powered by Zapier.

2010: Columbia, Missouri (nearly five decades later) - The Dodd–Frank act had just passed the Senate to "promote the financial stability of the United States" on the back of the 2008 financial crisis. The graduating class of students was about to enter a job market that was still finding its feet. But here, on a warm evening at the University of Missouri, there was music in the air. A jazz and blues quartet was on stage, blasting out Straight, No Chaser by Miles Davis ft. John Coltrane. Little would you have known, as the crowd grooved along and the jazz notes lit up the evening air, that in Wade Foster on the saxophone and Bryan Helmig on the bass guitar you were looking at 2/3rds of the founding team of Zapier and the future of workflow automation.

Wade and Bryan worked together at Veterans United Home Loans in Marketing and Product Development and took on many freelancing projects on the side soon after graduation. In Columbia, they were the "local internet folks", who could help you out with technical fixes both big and small. It didn't take long for a pattern to emerge from their freelancing exploits - a lot of these projects had to do with integration. Send a WordPress form to Salesforce. Send PayPal sales to QuickBooks. People were willing to pay them just to figure out an integration between two applications.

"Surely, there was a better way to do this?" thought Bryan, as he hit up Wade with a pitch for an "API of all APIs."

Bryan and Wade worked on the original idea "to connect paid apps", called it 'API Mixer', and took it to Startup Weekend in Columbia. A fellow engineering graduate from their alma mater, Mike Knoop, soon joined the team and built out the first front-end of the integrations tool. API Mixer won the first edition of Startup Weekend.

"Let's see, things that are fast, snappy… How about Snapier? It even has 'API' in it!” Snapier soon became Zapier and within days of winning Startup Weekend, the team was already talking to potential customers. They soon got accepted to YCombinator's batch of Summer 2012 and in October of the same year, raised $1.2M in seed funding from Bessemer Venture Partners, Draper Fisher Jurvetson, Wufoo co-founder Kevin Hale and a number of other angel investors - their last funding round till date (excluding secondaries).

Today, Zapier's universal switch-board powers automated workflows and allows different apps to talk to each other. A user-defined trigger sets a "zap" in motion that can perform a series of actions either within or across the thousands of supported apps in the ecosystem.

Zapier is valued at ~$5B having reached over $140M in Annual Recurring Revenue (ARR) in 2021. With over 300 app partners, integrations with over 3,000 apps, and an ARR per dollar raised ratio in the Atlassian zip code, Zapier has thrown the "How to be a Unicorn" manual out of the window and charted their own course to get there.

💪 Do things that don't scale

Zapier's early customer acquisition is a testament to Paul Graham's school of "doing things that don't scale" and why small companies can acquire and delight early customers in ways that big companies just cannot.

"One of the cool things that startups can do that big companies can’t is to go fishing in small ponds." - Wade Foster

Wade, Bryan, and Mike found early customers who were more than willing to pay for Zapier's suite of integrations. They took to Evernote, Dropbox, Highrise, and Stack Exchange forums and tuned into the frequency of people looking for integration requests. Zapier went from nothing to something through this very targeted outreach, and people started to take notice. Very soon, they attracted interest from the companies whose message boards they were targeting - this was the beginning of partnerships for Zapier.

Zapier's first users were the result of brute force founder-led outreach campaigns. It gave them the initial thrust for lift-off. The early culture of 1:1 customer service and solving customer issues over Skype calls has now coalesced into the culture of this extraordinary rocketship and remains exceptional even to this day.

"That’s something that any startup can do… anyone can provide awesome customer service. You don’t have to be a rocket scientist to just be nice and be helpful." - Wade Foster

🕸 Network effects and a developer platform

Zapier's story is also one of great timing. Open APIs had just started to gain traction. Companies like Twilio, Stripe, and Sendgrid were pioneering the API-first approach to development. You couldn't build a Zapier-like platform before 2010 because the tooling just didn't exist back then. And if you tried after 2012, well, Zapier had already beaten you to it.

While competitors like IFTTT struggled to catch up, ItDuzzIt focussed too heavily on engineering (and got acquired by Intuit) and the other competitors soon fell by the wayside, Zapier bolted ahead. And they did so with great marketing and the launch of a developer platform.

Zapier's early beta was pay-to-use. Wade says that this helped limit the product to users who found a real use for their tool (enough to pay) and eliminate the tire-kickers. Gathering an early set of high-quality users enabled the team to really refine the product and incorporate actionable feedback into the early product roadmap. But Zapier soon switched to a freemium model and a product-led ethos.

And while competitors like Apigee and Mulesoft built out enterprise-centric products, Zapier kept the end-user at the core of their product development and built out a product that anybody could take out for a spin and play around with. They were in the business of connecting PLG tools to one another, and it only made sense for them to be PLG themselves.

Zapier's first pricing models followed the Fibonacci sequence at $11, $23, and $58 for the Amp, Ohm, and Volt plans. Today, you can get started with a basic plan that has a limit on number of zaps and the update time, and upgrade according to your automation needs.

Having secured a $1.4M seed round and a critical mass of users, Zapier quickly adopted a marketing strategy that would scale with the company. At the core of their discoverability and organic growth is a truly legendary SEO strategy that is a case study in how to do SEO.

Unlike many products that created categories, Zapier was dealing with a market that already existed. People were googling for integrations all the time. Zapier's challenge was not to create intent. It was to address it. SEO mattered.

Zapier programmatically generates three tiers of landing pages for each new app that becomes a part of the marketplace:

Tier 1: A templatized landing page for the app, with human-generated content (Notion, for example)

Tier 2: Similarly templatized pages for every app-to-app integration (Notion to Gmail for example)

Tier 3: Pages for each workflow that's possible within each app-to-app integration (How to trigger an email from Notion)

The result? As anyone who has ever searched for an integration between two apps will tell you, your first ten search results are likely to be dominated by Zapier. Their organic traffic through search blows competitors Automate.io and Integromat out of the water.

Zapier today offers over 3,000 app integrations and powers automations ranging from central workflows at Fortune 500 companies to such side-projects as Seinfeldtext and Kanyetext.

Wade and team pounced on the breadth of use-cases Zapier was solving for their millions of users and wove out a content strategy around it. Just like the developer platform opened the doors to user-generated integrations, getting users to narrate their Zapier stories built a content engine that hummed along and built the narrative around the product through user stories rather than stories about the product itself.

"It’s not a product, like Slack, that you’re in every single day using day in and day out. So we’ve invested pretty heavily into the blog and learn to build up kind of a publication that keeps people reading about Zapier, how to be better at work, how to use different apps at work, and how to get more done.”

By building a resource hub that houses a community, Zapier university, Webinars, help docs, and more, Zapier has a finger on the pulse of the community and their user base - both current and potential. And as for existing users who need a helping hand, what started out as a brute force attempt to delight users and capture feedback has become part of the ethos at Zapier. Everyone at the company, irrespective of role, does customer support at Zapier.

Zapier's growth from $0-$140 million has been largely driven by their bottom-up self-serve engine. But in early 2021, with Steeve Vakeeswaran at the helm, Zapier started testing a Sales motion. Over the last year, Steeve has incubated, hired, and built a sales-assist team from scratch. In January 2022, Wade announced that they are officially hiring for Sales roles.

‌Sales-Assist Representatives will join the expansion team at Zapier and will become the touchpoint for teams and organizations buying and scaling their automation usage through Zapier's upmarket products.

The Zapier CEO refers to the flagbearers of the no-code/low-code movement as the "AWZ stack" - AirTable, Webflow, and Zapier. Airtable to store the data, Webflow to visualize it, and Zapier to power the logic and the interactions. Zapier's vision is to democratize automation and make people more productive at work by leaving the jobs that computers are good at, to computers. With the acquisition of Makerpad, a no-code education service, and community, Zapier is doubling down on the potential of the no-code movement.

“Makerpad’s vision is to educate as many people as possible on the possibilities of building without writing code.” - Ben Tossell, Makerpad founder

Zapier is lowering the barriers to entry for software creation and automation. They have blown the doors wide open for non-technical users at SMBs, start-ups, as well as entrepreneurs and solopreneurs to explore the productivity boosts that are possible with automation.