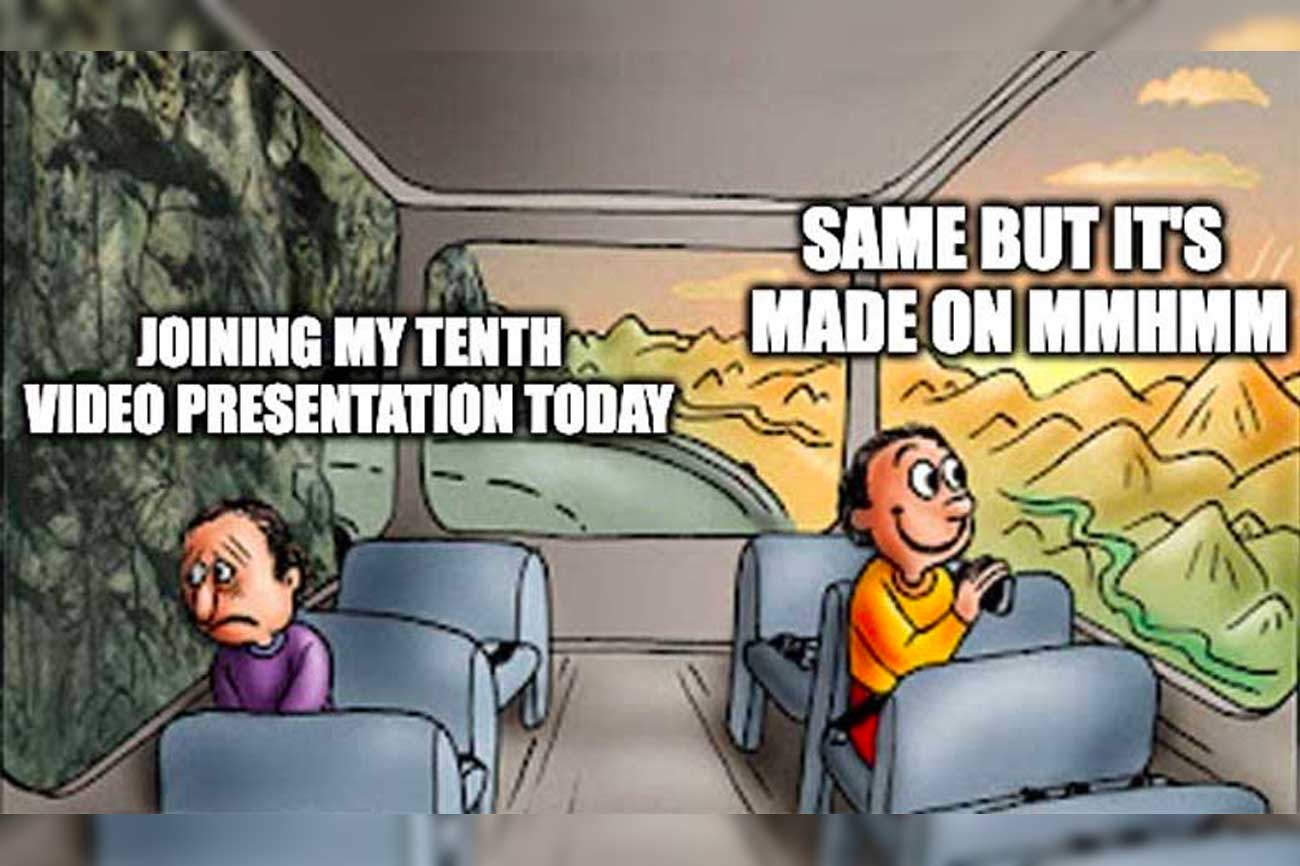 The product, growth, and company strategies that mmhmm employed to reimagine video and distributed work!

“I’m going to present my screen now. Let me know when you’re able to see it.”

Here’s an example of semantic satiation, a phenomenon whereby the thoughtless repetition of a word or a phrase leads to the sense that it has lost its meaning and appears to us as just garbled sounds.

If you have experienced this at some point in the last two years or have at the very least cringed at the seventeenth mention of the weekend (and not even that Weeknd) in the same thirty-minute Zoom call, then you have felt firsthand one of the real knockdown effects of the pandemic: depreciating relationship capital.

In the wake of the pandemic, we have had fewer and fewer opportunities to talk to people and really know them as people.

This means that Gary from work to whom you have been talking every day for the last two years could be watching the same obscure Macedonian documentary today about beekeeping that you are, and the topic of bees would still somehow never come up in your daily touch-base. Most tools we use to connect with co-workers today lack the surface area to reveal people’s personalities. Most tools are built to spend relationship capital, and very few give people a platform to build it.

As we realized the quality-of-life improvements of a flexible work environment, and the freedom from traditional office spaces, video communications became an indispensable component of our work lives.

The opportunity for communication superpowers that can structure our out-of-office lifestyle and still build relationship capital has been patently obvious in the last year, and quickly pouncing on that opportunity is a tool built in San Francisco that holds a rare privilege of having a name that you can say with food in your mouth: mmhmm.

Serial CEO and founder Phil Libin holds a rare distinction (and flex?) of having built and sold companies in all the major episodes of the technology era. In 1997, Phil and Co. created Engine 5 - an e-commerce platform, selling it for $26M conveniently before the dot-com crash. This was followed by a substantive security service Core Street which created tools for governments and banks, selling at $24M in 5-6 years from conception.

Phil's biggest claim to fame (pre-mmhmm) is his rollercoaster tenure as the co-founder and CEO of productivity software - Evernote where he joined forces with Stepan Pachikov to build a note-taking app that was used by 100M+ users and valued at $1B+ at his exit in 2016. After a brief VC stint with General Catalyst, Phil joined Jon Cifuentes and Jessica Collier to reinvent the Silicon valley model for building products.

All turtles is an AI-themed startup studio with offices in SF, Paris, and Tokyo. They work with an objective of removing the present-day barriers of building great products, like:

Product creators from across the world are selected on the basis of the novelty of the problem they are solving (and not market potential) and are provided backend support including but not limited to - AI expertise, design, data, HR, marketing, IP, analytics, and distribution.

“We’ll help you make a great product first. Then, if you want, we’ll help you build a company.” - All turtles

Their most remarkable graduate yet? Mmhmm - A tool that makes its user a better performer on all platforms video.

A pandemic baby co-founded by Phil and Steve White (later joined by Seth Hitching as CTO), mmhmm started out as a virtual camera that made the million Zoom, Webex, Gmeet calls which are now a constant in all our lives, more fun and engaging while also allowing for creative video recording. The user was given 'communication superpowers' to add a second screen to their video (that's where your slides would go), shuffle emphasis by moving yourself across the screen, zooming in and out, selecting context-specific backgrounds amongst many other features that made her a better presenter and performer. Here's one of the best demo videos ever made 👇🏻

The product that showed immense possibilities:

was quick to generate initial traction and investor interest, spinning off from All turtles to become a standalone entity.

📆 The year of the product

Mmhmm as an organization always had a clear roadmap of priorities as summarized by the elaborate 4-year plan that Phil used to align the board 👆🏻😋. Year 1 saw quick fundraising sprints (raising a total ~$140M from marquee investors like Sequoia, Softbank.. and The Chainsmokers? 🤔), rapid product and engineering hiring (supported by All turtles), and an elaborate beta testing program that relied on hand-raise users to validate the need and promise of the product.

Influencer participation is key in driving mmhmm's adoption amongst the creator circles and buy-ins from sports and entertainment influencers like the Chainsmokers and Chamillionaire are sure to help.

🔬 Extensive beta-testing: A scientific product development program throttled early access requestors creating a waitlist 100k+ long. The smallest statistically significant number of users who were needed to test new releases were let in and feedback was meticulously sourced to create a high-quality product.

The mmhmm app was released for general availability in Nov 2020 as a Mac-only product and was quickly adopted by the masses. Multiple feature releases later and having established strong foundations, it's safe to say that mmhmm has successfully completed the 'Start' year. Starting May 2021, the team is aggressively releasing features and optimizing for product-market fit and product quality, commencing 'the year of the product'.

👨🏻‍🎨 Prioritizing 'standalone': While the video conferencing use case comprises 60-70% of mmhmm's usage at the moment, it is very clear that content creation will take center stage going forward. Ventures into mobile and web with OOO iOS app and OOO web respectively, the Chunky way of recording (breaking down presentations into chunks for easy retakes) and the mmhmm tv, are feature releases that indicate that mmhmm prefers async comms and content creation over sync. Video conference is expected to continue as a growth lever that will leverage virality to introduce mmhmm to new users.

🤝 Acquisitions: Macro and Memix (from the start era) are key acquisitions that fast-tracked these aggressive product development cycles.

"I look for ways to integrate the core elements of compelling communication: storytelling, interaction, visual engagement, and captivating delivery within augmented virtual ecosystems. My goal is to make mmhmm-mediated events intuitively and seamlessly theatrical, dialogic, communal, and versatile." - Rebekah Maggor

🏢 Keeping your business on brand

Premium: The self-serve mmhmm premium offering, extends premium tools for $8.33/month (billed annually) and is free for students and educators for 1 year. These features are however free for 1 hour a day, for free users, and our PLG radar sense growth brilliance 🤩. Phil goes on record stating that despite it not being a priority, freemium conversions at mmhmm is 8x Evernote's metrics 🤯

Business: With video being a new way of working, mmhmm fielded enterprise requests resulting in features like - team management, shared design systems, and account licenses, allowing businesses like Cisco, Boston University, and Sequoia to 'keep their brand' - online. Organizations pay premium subscriptions and are charged only for active users.

“It was clear that there was a big demand for enterprise accounts,” said Libin. “Not only for central management, to keep it as easy as possible, but also for getting everything on brand. Companies and organizations of all kinds are realizing video is a permanent part of how we’re going to do business and it needs to be on brand.”

The business experience is further enhanced by a dedicated creative services team (one more source of revenue) who cater to custom needs of enterprise clients.

As suggested by the company's strategic roadmap, we expect more feature releases that convert casual subscribers into loyal users 'who will be very disappointed if they could no longer use the product' (re: product-market fit) in the next 5-6 months. This is expected to be followed by aggressive product-led, sales-assisted growth that increases mmhmm's use cases across industries and also expands its footprint within organizations. Super excited to see how mmhmm 'scales' and makes a 'profit' over the next 2 years! 🤩