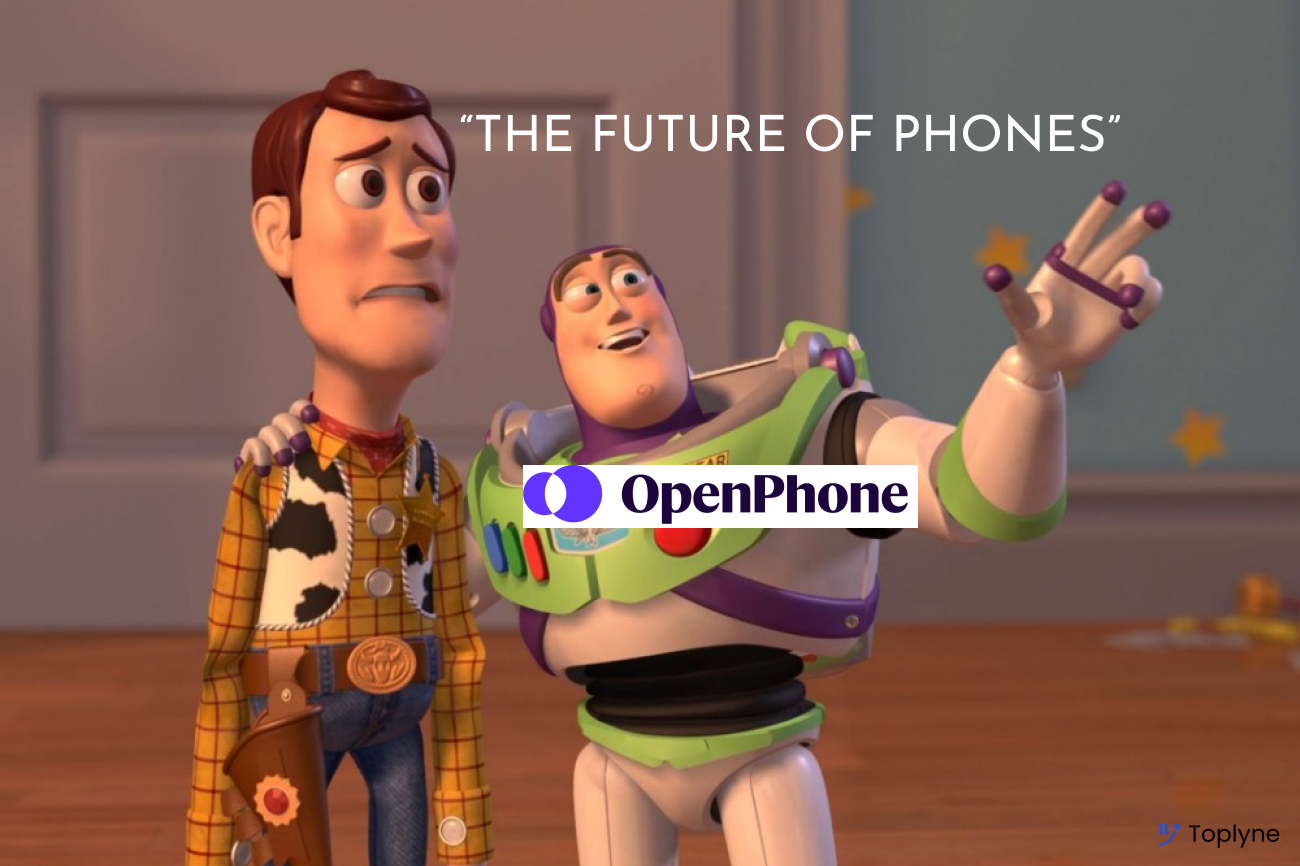 On March 10, 1886, Alexander Graham Bell picked up his shiny new toy, and uttered into it the first words ever said on a telephone:  "Mr. Watson--come here--I want to see you."

Martin Cooper, a Motorola researcher, and executive picked up a receiver that weighed 2 kg and was 9 inches by 5 inches in dimensions and dialed his rival at Bell Labs to say:

He was rubbing it in. The first call ever made on a mobile phone: the inventor trolling a competitor.

In 2023 - forty years and many millions of troll calls later, mobile phones are now ubiquitous. 4 out of 5 people in the world own a smartphone, and are reachable from any corner of the world with a lag of just a few seconds.

For business owners who share their personal numbers with customers, that’s often a problem - as Daryna Kulya’s and Mahyar Raissi’s parents found out. Panicking over missing calls, compromised privacy, and the inability to collaborate - were just a few of the problems both their parents faced while running their respective businesses.

Working in tech in Canada where the call rates are among the highest in the world, Daryna and Mahyar sensed an opportunity to change that. Their brainchild replaces Martin Cooper’s 9x5 Motorola and Steve Jobs’ 6x3 inch iPhone with an app that’s crafting the future of work phones: OpenPhone.

Large, sparsely populated Canada with its challenges of maintaining a wireless network has one of the highest cell phone calling rates in the world. So you can imagine the breadth of the smile that flashed across Mahyar’s face when his friend introduced him to a VoIP service to which he could port his number.

“Hey did you know that you can save 80% of your bills with this?” Mahyar, a trained engineer fired up the platform, and patiently set up the clunky VoIP tool that clocked the highest TTV in recorded history (probably).

Mahyar had previously worked with his now wife Daryna Kulya on a project called Milkshake - in which users could express themselves through 3 emojis, their location, and an optional image.

Daryna, who was working as a PM at Vidyard at the time took one look at Mahyar’s new phone set up and merely said:

She had worked at the innovation lab at Deloitte prior to Vidyard and had founded the Product Hunt community in Toronto back in 2014. She was very well networked. The duo had enough business owners as friends among them who hated using their personal numbers to know that there was potential here.

With Mahyar building and Daryna selling, project OpenPhone was started in late 2017. The mission? To build the world’s best business phone. The duo went through the University of Waterloo’s Velocity accelerator in late 2017 and then in early 2018, got into YCombinator, describing their product as a “Phone system meets CRM built for small businesses” in the YC application.

Today, OpenPhone is an app to which you can add all your work numbers. It can live on all your everyday devices, and on top of calls and messages, offers a full suite of integrations to your work tools.

Earlier in April this year, OpenPhone announced a $40M Series B round led by Tiger Global with past backers Craft Ventures, Slow Ventures, Garage Capital, and Worklife Ventures also participating.

OpenPhone’s Series A round in November 2020 was led by Craft and arrived on the back of the company tripling its user base and revenue since the $2M seed round led by Slow earlier that year. In the same year, the company saw 4.8x growth in MRR, 200%+ Net Revenue Retention (NRR) among teams, while processing ~20 million calls and messages.

These days, OpenPhone handles ~10 million calls and messages every month and is trusted by teams at Sonder, Linear, AirGarage, Soona, and Avalon, among others.

Let’s splice OpenPhone’s PLG DNA and take a peek at the growth mechanisms at play.

OpenPhone went to the Velocity accelerator around the time they launched their fully free beta product. At this time, ~1,400 people had signed up to use the tool - with varying degrees of engagement.

In the early days, Daryna and Mahyar realized that there was a minimum bar that had to be met with the product for it to be useful for customers. They weren’t there yet. The duo prioritized heads-down building over monetization.

But in the process, they did something that not many take the time and effort to do: they started talking to customers early - and zeroed in on the people who found this valuable. They built out a feature-set that these early advocates desired. For them, OpenPhone became a no-brainer - the alternatives were too hard to set up and use anyway.

By the time OpenPhone reached YC, they were starting to see indicators of users deriving value from the tool and showing intent to use it long term.

Yuri Sagalov told the founders during YC office hours in Toronto: “This is great. I’m curious to know how many of these people will actually pay.”

Daryna: “We’ll absolutely charge for it.”

Yuri: “Why don’t you do it now? People are deriving value from it.”

OpenPhone was ready to turn on billing. 50 out of 1,400 immediately converted and started paying them $10 a month.

Find users who have their hair on fire 🤯

OpenPhone’s early lift-off is inspired by the Paul Graham school of “doing things that don’t scale.”

Daryna realized very early on that OpenPhone had a tight product-market fit with a core set of users for whom the product solved an immediate problem. Users who had their “hair on fire”. There was just one minor hurdle in their way: discovery.

The SEO & Content engines were added to the OpenPhone arsenal much later, (Daryna says they should have done this sooner) but back in 2018, the discovery problem was solved with brute force. Daryna took to the depths of the internet - Reddit threads, Facebook groups, and other discussion forums - to hunt for users searching for a VoIP alternative, and interjected these conversations.

After billing was turned on, there was a generous transition period during which OpenPhone moved their 1,400 free users into paid plans. Daryna and the team were able to convert their initial core set of 50 paying power users into a strong weapon to drive their word-of-mouth growth. Many founders hesitate to ask for reviews, but OpenPhone’s users were more than happy to oblige upon being asked.

The team had set up Notifier for social-media listening. Not long after Daryna’s single-handed effort to drive discovery, the OpenPhone team was starting to see organic mentions on Reddit and Facebook groups of other users interjecting conversations to promote OpenPhone.

The word-of-mouth was strong in this one.

These days, OpenPhone has referral and affiliate programs that incentivize users to refer their friends/colleagues in exchange for rewards.

Cold e-mails, but with a twist 📧

With the advantage of the YC network under their belt, the founders found another way to target small businesses and start-ups. Daryna’s pitch in sending cold e-mails was two-fold:

A few spike events in the life of OpenPhone led to big spurts of growth for the product.

“If we didn’t start blogging sooner, we would have been in trouble” - Daryna Kulya, Co-founder

Here’s how their blog has grown over time since then.

OpenPhone’s first few versions were aimed at solo proprietors. As the product evolved out of just an iPhone app to a desktop app, Android, and became available for most everyday devices over time, the founders knew that they needed to bake in a land-and-expand motion very soon.

“Over the winter break, we rotated shifts to respond to customers on our OpenPhone number. We immediately felt the pain of not being able to tag each other on conversations with customers and leave internal notes. We wished there was a way to say "Hey Daryl, could you jump in here?" and hand off a conversation or get help with a complicated question.” - Daryna Kulya, Co-founder

In June 2021, the team launched OpenPhone for teams on ProductHunt, introducing the following dynamics that invoked virality:

🙋🏼‍♀️ Mentions - customer conversation inputs from your team - all behind the scenes.

♥️ Reactions - Not all messages need a detailed response.

A tale of two CTAs 💬

1. Get Started for free!

Prior to launching multiplayer mode, the Annual Contract Value (ACV) was low and a Sales motion didn’t make sense for OpenPhone. The initial GTM was purely product-led. Even today, OpenPhone offers a 7-day free trial after you place your card on file. Why a 7-day trial?

“The biggest advantage of a 7-day trial for us is learning. What type of people really really need this? We can’t figure this out if we waited for 30-days. For low TTV products like ours, we can learn much faster with a 7-day trial.” Daryna Kulya, Co-founder

In June 2021, that changed. Along with the “Get started for free!” CTA, another one made an appearance: “Talk to Sales.” OpenPhone onboarded Giancarlo Gialle, who previously served as head of SMB sales at Pinterest as Head of Sales in February 2022.

The Sales motion at OpenPhone is largely oriented towards SMBs and startups, and less towards large enterprise logos. Giancarlo’s aim will be to target 33+ million small businesses in the US & Canada who are currently running on legacy solutions.

Along with a Sales motion, OpenPhone has built in a sales-assist motion where Sales can hop in to guide users only when there are barriers or when there’s a commercial conversation that needs to be had.

The future of telephones 🔮

On the back of their hot new Series B round, OpenPhone is doubling down on its vision to bring collaboration to the phone.

“One of the big goals is to invest in integrators,” says Daryna. “For example, one key piece is to connect OpenPhone to CRMs.”

OpenPhone’s unique selling point is good ol’ telephonic magic for the SMB customer segment made available with the lowest friction possible, with added layers of collaboration, and a plethora of integrations.

We’re not far away from a world where if you are an SMB owner, your telephonic conversations are all routed from within OpenPhone, but are then sent to Otter or Descript for Transcription using Zapier, which are then summarized using a GPT-3 powered tool such as Copy.ai, and then synced to your Salesforces and Hubspots, while a summary is sent to the Slack groups you want.

The telephone character arc needs a rewrite. And OpenPhone is single-handedly driving that script.