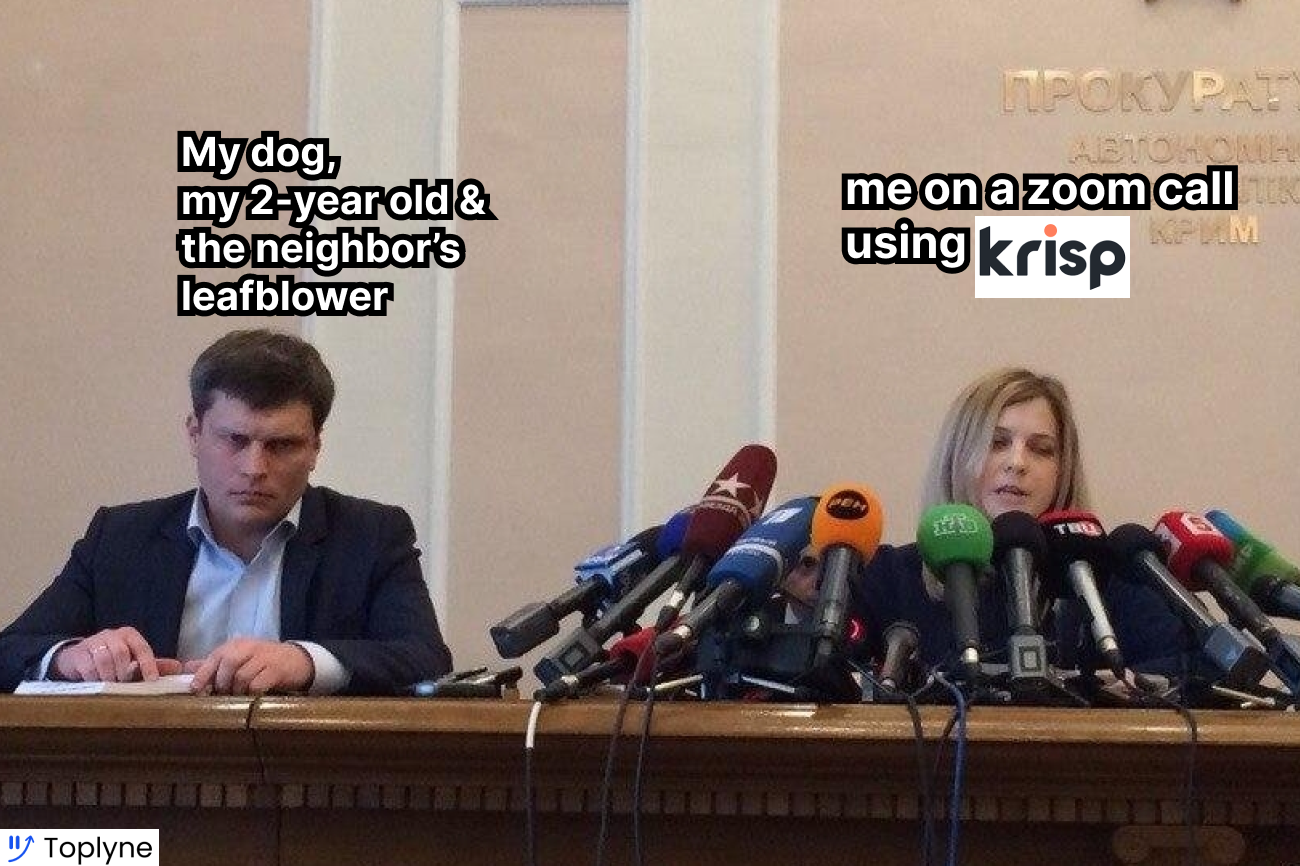 The product-led growth of the noise-suppression rocketship that grew its active users by 20x, enterprise accounts by 23x, and ARR by 13x in ONE year - and continues to ascend

Marc Cenedella believes that we’re witnessing the largest societal change since the end of the second world war.

The CEO of the online job search service Ladders says that the writing is on the wall. Remote work isn’t [Fluffy the dog goes woof woof in the background] going anywhere.

According to the company’s projections, 25% of all jobs in North America will be fully remote by the end of the [fire engine sirens blaring] current year. And that number will continue to increase in 2023.

The largest societal shift since the last world war has had many knockdown effects on the way we navigate our professional lives. In the sanctuary [the Succession opening song plays in the other room] of our homes, optimizing for time and productivity has become part of the gig. Our calendars are holy to us, our inboxes sanctum sanctorum, and pants, optional.

Free access to PLG tools like [the neighbor turns on an 18th-century leaf blower, antique] Calendly, Clockwise, Slack, Superhuman, and Zoom promised to boost our productivity - and they did. But who among us [phone rings, but instead of the iPhone ringtone, it’s Gojira’s Art of Dying] hasn’t dialed into a call where the cacophony on show might have put a mosh pit to shame?

They set out to slay a proven productivity killer - a constant feature of every second call you’re likely to hop on today - background noise. Their weapon? The krispNet Deep Neural Network that powers Krisp.ai.

Back in 2017, Davit was at the approximate center of the emergence of companies enabling communications - he was head of product security at Twilio. His friend, Artavazd (Arto), a Ph.D. in Mathematics, was digging into machine learning and was looking for an interesting problem statement to solve.

So when Davit pointed out to Arto that background noise and busy video backgrounds were constant features of his conference calls at Twilio, Arto’s ears pricked up.

He gave Stepan Sargsyan - their current Chief Scientist - a ring, and in the next six months, fired up a prototype of their noise-cancellation technology. It was far from perfect. But it was years ahead of the tech that existed at the time.

The trio came together and incorporated 2Hz Inc, raised $500K from UC Berkeley’s Skydeck accelerator, and then a $1.5 M round led by Sierra Ventures and Shanda Group.

The idea was simple: Mix a large dataset of common background noises and another large dataset of clean human voices, and you’re left with two very useful datasets - noisy human speech and the clean speech output for the same. Upon feeding these two datasets as input and output, 2Hz’s KrispNet Deep Neural Network was able to create a mask that filters out the noise and leaves the human voices intact.

All of this magic happens on the device, and with minimal latency - ~15 milliseconds.

As opposed to Active Noise Cancellation (ANC), which typically requires multi-microphone headphones, 2Hz’s noise suppression could run on most devices, with very little overhead. And unlike ANC, it could suppress noise that goes from your background to the person you’re talking to over the call, while also suppressing the background noises from their end.

2Hz has since rebranded to Krisp.ai, and today supports the cancellation of a range of background noises including:

Krisp has also moved to leverage useful metadata from calls to report useful analytics on virtual meetings including “talk-time”, call participation (how often did you speak up on a call?), and other meeting insights.

Krisp works at the level of your OS’s sound processing and integrates easily into all the common communication tools - take your pick from the 800+ supported apps.

The Armenian-American start-up raised its latest round of funding in February 2021 - a Series A round that in total amounts to $14M. The $9M Series A-1 round was led by RTP Global with participation from existing investor Storm Ventures.

The latest round of funding arrived on the back of the company clocking some enviable growth numbers: In 2020, Krisp saw a 20x increase in active users, a 23x increase in enterprise accounts, and a 13x lift in Annual Recurring Revenue (ARR). Although the growth spurt was largely aided by the onset of remote work, the noise around Krisp was not a 2020 phenomenon. The company had already gone from 0 to 600 paying enterprises, and $0 to $4 million ARR, in a single year.

Pivoting to the consumer 👩🏻‍💻

Davit and Arto originally envisioned Krisp as something that could be sold directly to mobile network providers, or even the Skypes, Zooms, and WebExes of the world. The duo realized soon that for this business model to work, they would need to ramp up their resources, experience, and networks. And that was going to take time.

“Traction with customers was slow, and this was a problem for a young startup. However, people were loving the idea of ‘muting noise,’ so we decided to switch all our focus and build a user-facing product.” - Davit, CEO

With a version that runs on the Mac and in true product-led fashion, Davit and Arto went straight to the consumer instead.

An early tryst with enterprise 🤝

Krisp went live with a freemium pricing model early. Even today, the free tier offers up to 90 minutes of the core offering for free daily.

Early on, Krisp’s revenue was entirely driven by the B2C use case. That changed in December 2019, when they started onboarding enterprise customers. By March 2020, their biggest customer was a tech giant with 2,000 employees. Think 2,000 Krisp licenses. 🤑

“Gradually enterprise is taking over because we’re signing up banks, call centers, and so on. But we think Krisp will still be consumer-first, because everyone needs that, right?” - Davit, CEO

Davit and Arto realized that the meat was in the B2B motion and baked governance and security features that enterprise buyers demand into the product.

Krisp solved a very real pain point for remote workers, gamers, and digital nomads around the globe. Their DNN-powered tech was at least two years ahead of the rest of the world, which meant nobody else was addressing this unique pain point.

Krisp’s early battle was one of discovery: getting a craving market to discover a bleeding-edge product that solved a very real problem for them in a unique way.

A strong 1-2-3 punch of ProductHunt, HackerNews, and AppSumo helped boost discovery early on.

The team would come back to PH 6 more times, and bag 11 badges overall including the Golden Kitty Award for Product of the Year twice - in 2018 and 2020.

Hackernews: Krisp’s launch on HN got the “HN hug” - the post stayed on the front page of HN for more than 14 hours.

Appsumo: Appsumo deals is a platform of ~800k tech enthusiasts who hunt for lifetime deals on software. Krisp launched on the platform in August 2019 and spurred a wave of ~5,500 early adopters to the platform.

Krisp continued to bag laurels from all corners of the globe, including:

Krisp was already driving growth through word of mouth, and successful launches on PH, HN, and AppSumo when the team introduced referral and affiliate programs into the mix.

These programs served as afterburners on an already purring growth engine.

Krisp brought on a Sales team early in 2020. Today, the team of ~16 SDRs and AEs are tasked with landing and expanding at SMB, Mid-market, and enterprise accounts.

Robert Schoenfield serves as the EVP of Licensing and Partnerships.

Asti Pili heads the growth team at Krisp that’s currently looking to bring on more growth PMs with an experience in PLG to drive a culture of experimentation and measurement that’s crucial to bottom-up adoption and ultimately monetization. With experienced growth professionals such as Elena Verna serving as advisors, Krisp’s next steps on the GTM front will be worth looking out for, especially down the road in the product roadmap.

What’s next for Krisp? 🔮

Sitting between system sound drivers and applications, Krisp is able to leverage valuable metadata from calls to roll out call analyses and reporting. The focus in the immediate short-run seems to be on this front: noise insights and detection of interruption and monologues.

Forays into note-taking and sentiment analysis seem likely as well, while video background removal (which is in beta testing) might become a focus area down the line.

“Speaking is a skill that people can improve. Think Grammarly for voice and video”, says Davit hinting at what’s coming next. “It’s going to be subtle about how it gives that feedback to you. When someone is speaking they may not necessarily want to see that. But over time we’ll analyze what you say, give you hints about vocabulary, how to improve your speaking abilities.”

The “Grammarly for voice and video” is a multibillion dollar market, especially if the Ladders CEO is right about remote work.

In a world that’s increasingly going remote, very few tools are must-haves. The list of tools that offer direct meaningful boosts to productivity is a small one.