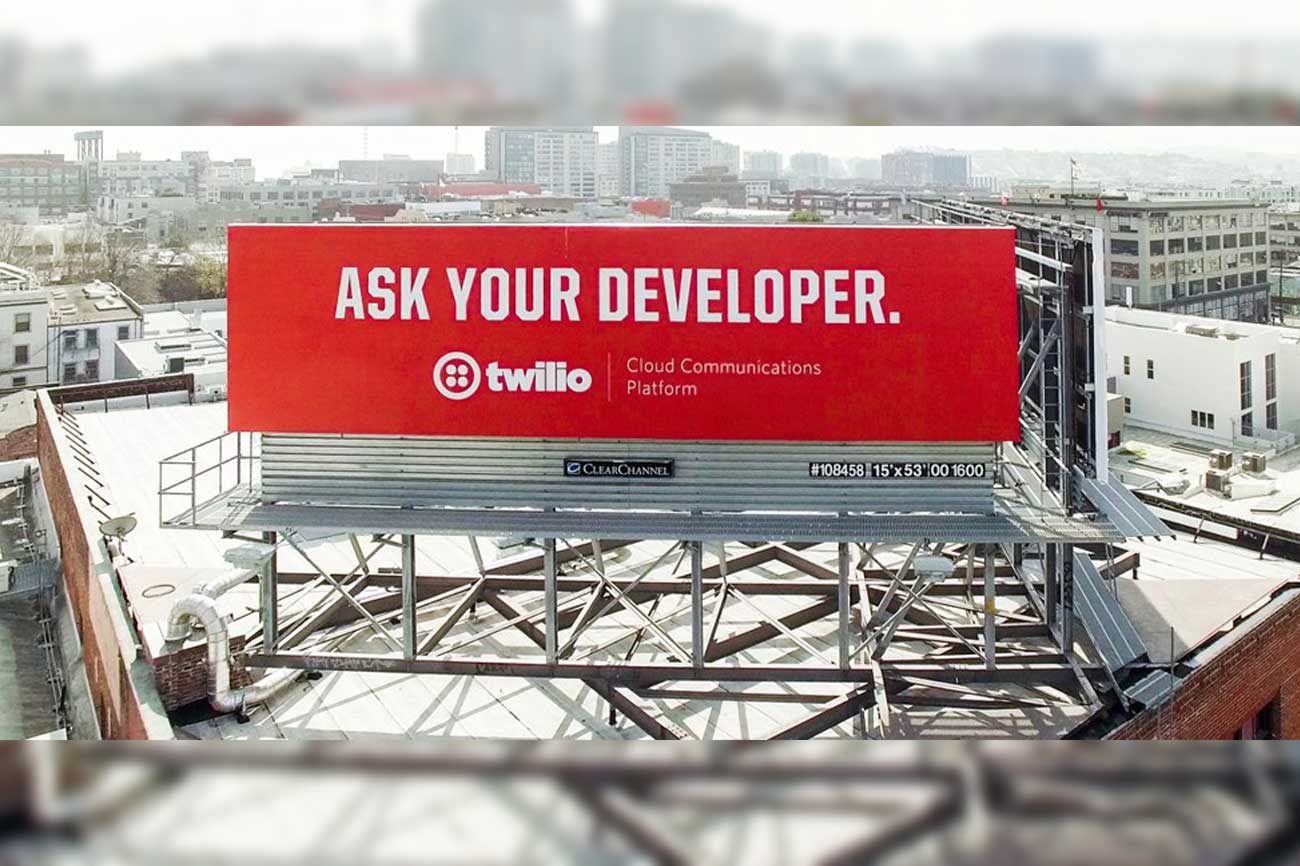 Have you ever bought a subscription on Netflix? Ordered a cab on Uber? Booked a rental on Airbnb? Made a payment on Stripe? Or sold something on Ebay?

Well, you've probably (silently 🤫) interacted with one of the world's most important companies you've never heard of - Twilio! Twilio is the platform all the above-mentioned households names use to communicate with their customers and users.

That SMS from Airbnb confirming your booking. That's Twilio! That ETA alert regarding your Uber driver's imminent arrival. Twilio again! That Netflix invoice at the end of the month. You guessed it right, Twilio! 😬

The odds are, if you have a phone or an email id, you've interacted with Twilio without even knowing it!

Twilio now, dominates the Communications Platform as a Service (CPaaS) space, negating most businesses’ need to develop in-house communications infrastructure. But why was it Twilio that silently rose to the top? The answer is an unwavering belief in developers and their ability to unlock innovation within the business! While their competitors were busy wining and dining the head of IT, or a CXO; Twilio focussed on appealing to the developers building the actual products.

Today, thirteen years since its founding, Twilio is used by over 10M developers globally and enables 932 billion human interactions every year! 🤯

The following is a deep dive into how developers are deeply ingrained into how Twilio markets itself, prices its product, onboards employees, and thinks about product expansion.

Show and sell... selling to people who hate being sold to 🤫

"We just started by treating developers like customers. It sounds really simple, but there’s a lot to it. Most companies who claim to serve developers actually don’t see developers as customers. They see them as a strategy. Developers aren’t customers for them. They’re like an audience that you try to win over in order to actually add more value to the company. And if it works, great. If it doesn’t, then you change strategies." - Jeff Lawson, Founder & CEO, Twilio

At a popular networking mixer called SF New Tech Meetup in 2010, rather than talk about a difficult to articulate communications infrastructure technology, Jeff Lawson let the Twilio software speak for itself. In front of a crowd of 1000s, Jeff began telling the story of Twilio and its product while simultaneously coding up an application on a projected screen — a simple conference line. In a matter of seconds, he opened an account got a phone number, had a conference line up and running, and asked everyone to phone in. And just like that, a throng of developers joined a giant conference call! Lawson then added a few more lines of simple code and retrofitted his app to call all participants back and thank them for participating in the demo. As phones throughout the room began buzzing simultaneously, the crowd went wild with enthusiasm! 🎉

Below is a recreation of the same demo in a New York Tech Meetup... Enjoy the brilliance of how Twilio sold to developers!

The same culture of reducing developer friction extends to Twilio's pricing plan, which firstly includes a free tier, and further ties Twilio’s revenue directly tied to its customer's unit volume usage on the metrics that matter i.e. SMS volumes for text-oriented clients, gigabytes of video for customers of the company’s video communication offering.

If you're a developer who wants to explore the possibility of using Twilio for a small proof of concept, chances are, you're not going to need your boss's approval to pay for it or try it out

Putting yourself in the shoes of your customer... A culture of building 🛠

We decided that the prerequisite of customer focus was empathy, and the best way to build empathy for somebody is, as the saying goes, to walk a mile in their shoes. So we decided to articulate one of our core values as “Wear the Customer’s Shoes.” - Jeff Lawson in his book, Ask your Developer

If you're a new employee at Twilio, your first few days on the job are not going to be as you imagined. Twilio takes its core value of wearing the customer's shoes very seriously. Every new Twilion (yes, that's what folks at Twilio call themselves!) must develop an application using Twilio. It doesn't matter if you work in sales, customer success, finance, or legal, your first few weeks will be spent learning the basics of programming and of using Twilio's easy-to-use drag and drop interface to hack together an application.

All new Twilions must develop a new Twilio-based app and present it to the entire company!

Admittedly, most apps are not practical. Some respond to text queries with something as impractical as gifs of popular cartoons. But that's not the point. Every employee (even non-technical folks) goes through the process a customer must go through. And this is how Twilio ingrains empathy in its organization 🤝

Jeff's realization of the need for sales came early on. He notes that in Twilio's early days he was being a founder, and hustling, and meeting customers and shaking hands and learning about their business, and saying, “Hey, what if you did this or that? Hey, we can help you with that.” On his way back to the office he often wondered, “I don’t know if we need a sales model.” And then one day the realization hit him

“Wait a minute. Every major account that we have, it feels like I’m touching, I’m active, I’m giving them love and all that. I’m like, That’s sales, OK, screw this." 😅 - Jeff Lawson on when he realised he was doing sales

3. A team who knows how to sell - An experienced sales org with proven track records at companies of significant scale (the likes Salesforce,               AWS, Box, etc.)

The road ahead for Twilio ⏭

The company’s laser focus on APIs has earned it a market value of more than $61 billion, about 22.8x its annualized revenue based on 2021’s second quarter, which included $46.6 million from its acquisition, Segment. What’s more impressive is the company’s future efforts. It already has “The Super Network” - its software layer that allows its customers' software to communicate with connected devices globally. It interconnects with communications networks and inbox service providers around the world. This, in addition to the Twilio Customer Engagement Platform, can be used to build practically any digital experience, it says. Twilio enables using capabilities like IoT, cloud computing, machine learning, and mobile apps to help businesses engage with their customers.

Another major priority for Twilio seems to be their recent focus on acquisitions! Usually, announcements of acquisitions lead to a dip in the stock price of the acquirer due to investors’ fears of imprudent use of capital, possible worries about stock dilution, etc. The past 12 months have been eventful for Twilio, whose recent acquisitions hint at the organizational focus in the years ahead. How have investors processed this deal spree? Apparently, quite positively!

Twilio is also very much a "US company" as of today! Over the next few years, we're excited about the company's potential to extend its reach into global markets and power the world's exponentially growing base of remote-first global developers!