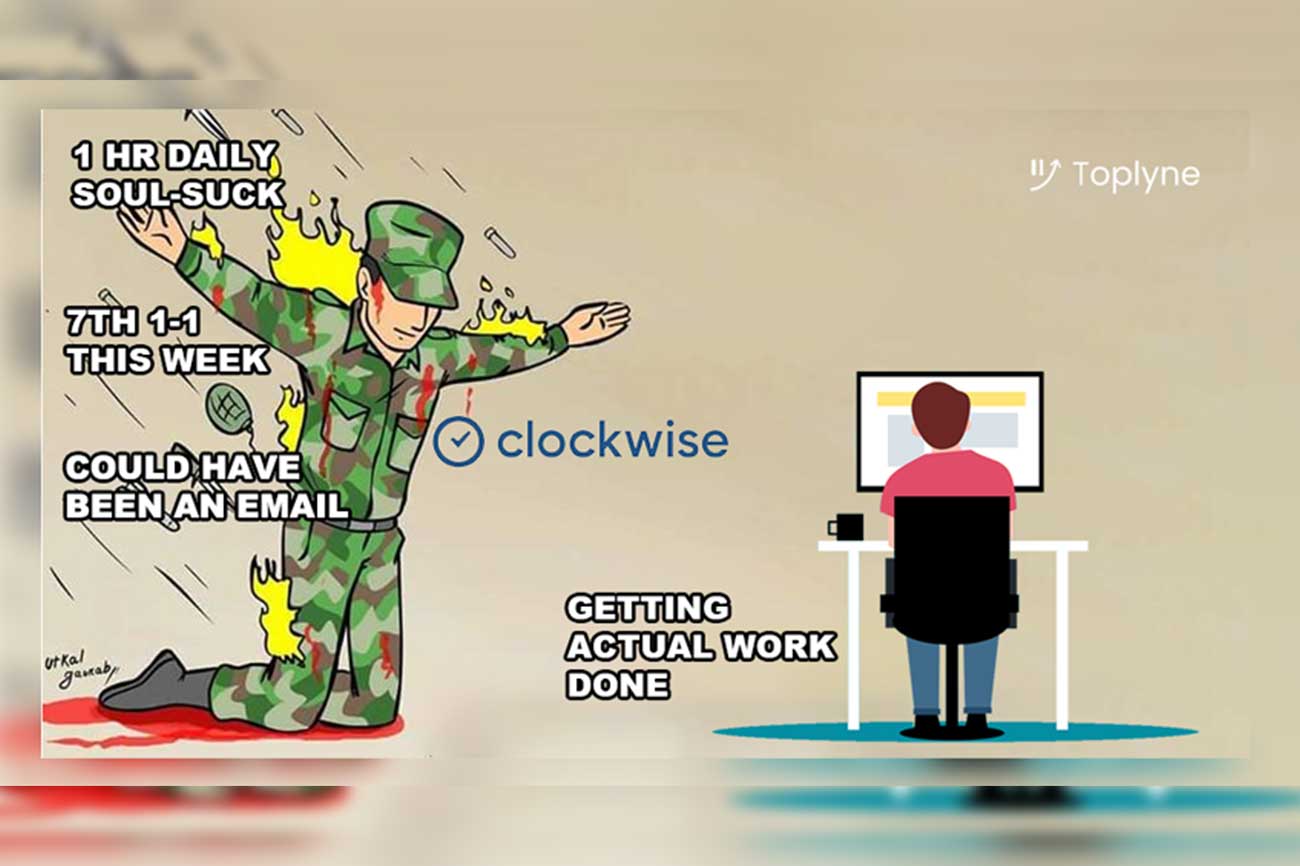 ‍And you run, and you run to catch up with the sun but it's sinking

Racing around to come up behind you again

In the fifty or so years that have followed the release of Pink Floyd’s Dark Side of the Moon, the average amount of time spent by an executive in meetings has roughly doubled to a stunning 23 hours per week. Today’s CEOs spend approximately two working days per week in meetings. It is unlikely that Roger Waters and David Gilmour had this in mind when they wrote Time, but the lyrics are strangely relevant to the workplaces of today where no resource is perhaps as misused and violated as time.

Unnecessary meetings come in all shapes and sizes - meetings with no agendas, with vague titles (“catch-ups”, “1:1s”, “touch-bases” or anything with a food/beverage in the title), some that could have been a tweet-sized e-mail and some others that fail what Phil Libin of mmhmm calls the face hole test: a meeting in which only one person is moving their face hole, and therefore should instead have been a recorded lecture.

While a lot of meetings that hit our calendars are avoidable, some are still essential for collaboration and ensuring proper information exchange within and between teams. In the madness of getting things done through blocking time on each others’ calendars, is a lack of optimization for what computer scientist and author Cal Newport calls time for “deep work”, or in other words, time when s%&t actually gets done.

“Did your week feel like one of those Salvador Dali melting clocks?”

If the answer to that was a resounding yes, it is very likely that how you spent your time this week could and should have been optimized.

This is at the heart of what Matt Martin and Clockwise attempt to do and why this five-year-old company has been able to scale rapidly in the last two years. There are a lot of zombies among us whose weeks feel like one of those Salvador Dali melting clocks.

"Time as a shared resource inside the modern workplace is really a tragedy of the commons where everybody is able to take from each other, but nobody's watching out for that shared resource." - Matt Martin, CEO

There aren’t many professions in the world where the preciousness of time is more apparent than one where time is measured in six-minute increments: Law. It is not a coincidence that it took a trained lawyer to bring the appreciation of time as a resource into the mainstream. Civil litigator turned software engineer, Matt Martin and his current co-founders Gary Lerhaupt and Mike Grinolds felt first-hand the pain of mismanagement of time during their time at RelateIQ (acquired subsequently by Salesforce) where they found themselves in a sea of meetings every day that left them with very little time to get their work done.

Clockwise was born out of the idea that the intelligence coming out of shared calendars, communications, and tools like Slack can be used to better manage time as a shared resource.

The Clockwise browser extension (Chrome, Firefox or Safari) plugs neatly into your google calendar and immediately impresses you with one of the best onboarding experiences you are likely to get from a product. The highly thought-out introduction to the app is clear, instructive, and most importantly lets the user know that they are in charge here: At no point is Clockwise going to make changes to your calendar without you knowing about it well in advance.

There's no messing about, as the app then jumps immediately into your calendar and starts working its magic. Here are the spells Clockwise then casts on your schedule:

Matt and his team made the product that had long been in beta, available to the public on the back of their series A raise led by Greylock and Accel in Jun 2019. "By January 2020", says Matt, "we were on fire."

Clockwise's active user count grew 5x in the first year after launch. By January 2020, they were growing at a clip of well over 5% week over week, as more and more people sought out remote tools. The series B funding of $18M in June 2020 led by Bain Capital Ventures took their estimated valuation to roughly $111M. By this time, Clockwise had been adopted by employees at companies like Slack, Spotify, Etsy, Pinterest, Etsy, Twitter, and more. They hadn't spent a penny on sales or marketing yet. How did they do it?

🗣 Word-of-mouth: Nothing sums up Clockwise's viral word-of-mouth adoption better than this tweet by the head of engineering at OysterHR:

Clockwise goes to town on your calendar and gives you valuable hours back immediately after you start using it. It is a tool that is able to compound its value to an organization as more and more people start using it to tuck away uninterrupted hours on their calendars.

🔁 Strong product-loops: On top of being a highly visible tool, Clockwise has a lot of product loops built into it that enable it to grow virally among teams, verticals, and eventually organizations. Examples of embedded virality include e-mails it sends to attendees on behalf of the organizer and their highly incentivized invite program.

It took my team-mate less than half a day to figure out that I had started using Clockwise. How? The Slack integration had automatically synced my Clockwise-optimised calendar to my Slack status:

Once used widely within teams, premium features like smart meeting breaks, automatic no-meeting days and out-of-office calendars are all available for a price.

📅 Weekly reports: Clockwise is able to cut fragmented time and give back focus hours without cutting down on the number of meetings. The weekly reports it generates drive strong retention because they are stark reminders of the core value proposition. The reports are a way for Clockwise to quantify and communicate its value especially to managers who want to be mindful of how their teams' time is being utilized.

“One thing I really love about Clockwise is that it gives me confidence that I'm using my team's time as mindfully as possible” - Greg Sabo, Engineering Manager at Asana

🖨 Content engine: Clockwise’s content strategy is three-pronged. Apart from product and company updates, they generate content about the “Future of work” and “Time Management”, both of which tie back to a use-case that Clockwise helps solve. Their content engine is similar to Canva’s in that the content helps users get the best out of Clockwise, which drives traffic, growth, and retention.

Clockwise is currently hiring and expanding the GTM team to further boost their growth and adoption. Francis Larkin who has previously led growth and marketing at InVision and Airtable is VP of Marketing while Tatiana Armstrong heads the Customer Success team, Glenwood Barbee heads product marketing and growth marketing is led by Kacy B.

Two key members were added to their growing team of ~60 employees in the last six months:

🛒 B2C2B: Clockwise hired their first VP of Sales in June earlier this year. Kevin Nothnagel joined the team from Productboard where he grew the sales team, launched their outbound motion, and grew sales by $10M in under 2 years. Kevin is no stranger to PLG companies having built the outbound team at Dropbox during his 4-year stint there. Kevin is building out the B2C2B sales motion at Clockwise and has started with a fledgling team of <5 Strategic Account Executives to layer in a top-down Sales nudge to the existing strong bottom-up adoption.

👥 Community: While the future of work is anybody's guess, Clockwise has a place in any conversation around the evolution of the modern workplace. Anna Dearmon Kornick joins Clockwise to champion the role of time management in that evolving conversation. Host of the It's About Time podcast, Anna hopes to build around the core product a community of people who want to improve their work/life balance and time management at work. For a product with adoption as viral as Clockwise's, a growing community is a surefire driver of growth.

🔮 The future of work (via Clockwise)

Clockwise's mission is to help people make time in their day for what they need to do. Matt says that they're open to going anywhere that takes them as a company and a product. While the immediate next steps are to support more calendars, starting with users of Microsoft 365 and Outlook, the longer arc the company is aiming for is to connect, categorize and coordinate all of the world's time: Something Clockwise is already doing for hundreds of thousands of calendars around the globe.