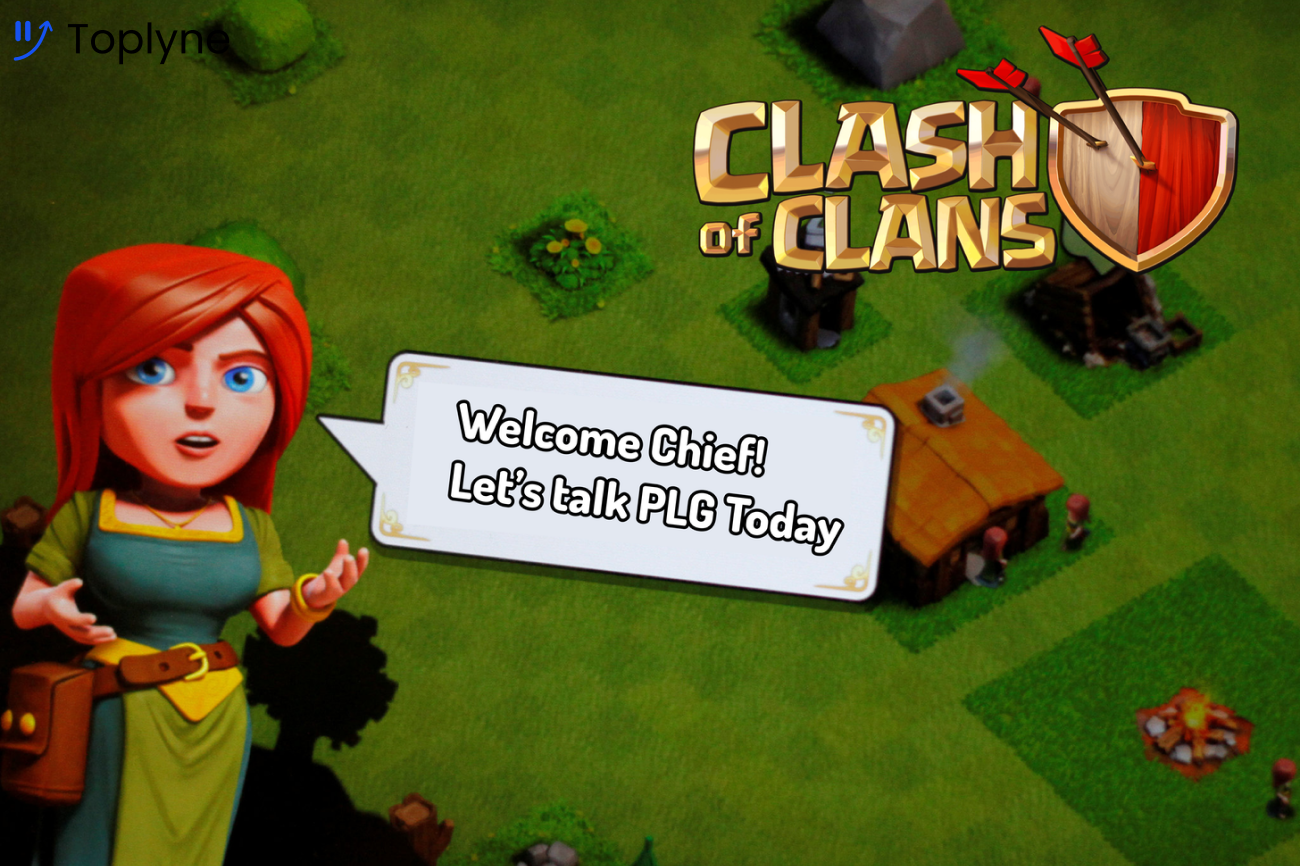 What SaaS Product-led companies can learn from Clash of Clans

The Hagenuk MT-2000. If those words mean anything to you, or better yet, sent a shiver down your spine, congratulations - you were witness to the dawn of an industry that is predicted to grow to a whopping $400 billion in the next five years - mobile gaming.

The Hagenuk shipped with a game (Tetris) pre-installed and became the first mobile phone ever to do so. Only '80s kids in Denmark will remember. Soon afterward, Nokia showed their teeth (fangs) and unleashed a beast that still roams the planet: Snake. Snake was included on every device Nokia has ever released, with about 400 million devices shipped with the game pre-installed as of 2016.

The introduction of accelerometers, capacitive touch, and multipoint sensing in the iPhone in 2007 saw the birth of such classics as Tap Tap Revenge and Trism. The number of mobile apps grew 200 times in two years after Steve Jobs unveiled the iPhone to the world. Moore's law played out before our very eyes as birds, both angry and flappy replaced the snake. Those among us who spent many a sleepless night on Flappy Bird only to clock a high score of 3 gave up soon after and found solace in Cut the Rope instead.

2010 was pivotal in the world of tech. The tides of the default SaaS go-to-market motion were slowly turning, as Candy Crush made the freemium model in mobile gaming widely popular. Meanwhile, not too far away from the birthplace of Snake in Espoo, Finland, a clan of 6 - Mikko Kodisoja and Ilkka Paananen, who had worked at another mobile game company before, along with four others they knew through work connections were just setting out to build the next big thing in the world of mobile gaming: Clash of Clans.

“In 2010, we founded Supercell on the belief that creating great games is all about having the best people and providing them with the best possible environment to focus on developing the best games.” - Ilkka

Supercell got together in a 30 sq. mt space in Espoo, Helsinki, and in a year's time launched Gunshine. With 500k active users, the massively multiplayer online role-playing game (MMORPG - gotta love gaming acronyms 😅) made for Facebook saw mild success 🟡. Retention numbers however painted a picture that contradicted with Supercell's principles (#3), and when this was combined with a renewed love for mobile (the age of the tablet, app store and touch screen had arrived) - the game was killed ☠️ - a move that would become a notorious norm at Supercell.

Today, Supercell is a $10B+ Tencent subsidiary (~84% stake with rumors of a complete buy-out) clocking $2.24B in annual revenue (2021) with an EBIDTA of $824M, from 5 super hit games - Clash of Clans (CoC), Clash Royale, Hay Day, Boom Beach and Brawl Stars! Behind the jaw-dropping revenue, downloads, DAU, MAU, and retention metrics of Clash of Clans and other Supercell games are inspiring product-led growth lessons for you and me. After all, gaming companies are the OGs of PLG! ❤️

Here's Liam Neeson's response to an attack on his CoC village. They played this at the Superbowl too. We'd stay away from his village 🥶

While pumping marketing dollars got the downloads counter ticking, it was a 'chef's kiss' onboarding process that activated the chiefs the CoC villages were waiting for.

🐣 A great First Time Experience: Players are dropped in an Interactive tutorial and are guided through the core workflows associated with the game. Major game elements (building a base, training troops, collecting resources) that are required to initiate a new player are sequentially touched upon as sub tasks. Throughout the process, the player is Figuring the game out themselves, are simply guided on by the process.

A new user only takes 52 sec to make their first design on Canva!

"We have less dependencies in the early stages of the game, so we've worked very hard on our tutorial," product lead Lasse Louhento

"Patience grasshopper": Another onboarding element that CoC and other Supercell games get critically right is the sequencing of tutorial flows and feature introductions. The complexities of a very deep and feature-rich game are abstracted as elements that are only relevant for experienced players and are hidden till the right pre-requisites are met. A good example is the Clan Castle in CoC which introduces a young player who has already figured out the basics of the game to enter the social gameplay realms of the game.

An approach that can effectively declutter first time experience for PLG self serve users elsewhere too!

The Supercell principle of "games that people will play for years" takes its root from the critical role of retention, and customer lifetime value on its business model. Successful companies in the gaming industry are those that can invoke strong loyalty and habit building amongst their players. Celebrating a decade in the market, its clear that Supercell made a game that people will play for years with Clash of Clans!

🔁 The Core Loop: The pillar of CoC's retention success is a Core Loop that rewards users every time they returned to the game.

The core loop is further fueled using push notifications which act as a cue for logging in, the core loop activities are actions, and progress through the game is a reward. Measurable progress and clear-cut actions to get there create a flow state which results in habit building. This method is actively employed by Superhuman in driving their users towards inbox zero!

🧮 Measuring engagement: Supercell and the CoC cell track product usage information religiously to drive engagement and retention. Retention rates () at the end of 1, 7, and 30 days from activation are used to segment users into:

Each segment has different needs and is catered appropriately.

Social gameplay via clan battles and leaderboards is another key component of the CoC player base. Players create their own clans, join existing ones, share resources, and battle with + for each other creating community behavior around the game. Collaborative buy-in from offline circles increases stickiness and also creates virality for customer acquisition.

Remember losing interest in Super Mario after you finally saved the princess? CoC live services team works to ensure that the product roadmap has fresh content, gameplay features and a new townhall upgrade before their elite group of users gets bored. Continued value delivery keeps the game exciting and becomes a moving goalpost for invested-elite users, reducing churn.

Clash of Clans is a F2P (Free to Play) - P2W (Pay to Win) game. As the acronyms suggest, the game in itself is completely free with no gated features coming between an individual player and their game. This is very similar to the freemium pricing models of many of our favorite PLG companies. However, if a player wants to accelerate progress and skip the queue for training their dragon or building an archer tower, they can "Pay to Win"

As you progress in the game, the incremental resources and time required for hitting the next upgrade increases. A player can skip these queues by using Gems - a convenience currency that can be earned during the game or alternatively can be bought as an in-app purchase. Gems can replace gold and elixirs, and can also be used to skip waiting times. CoC's product brilliance introduces diamonds as a natural part of the game using giveaways and also by including them in the tutorial flows of the early days.While earned Gems create habits around using the convenience currency, super cheap introductory offers prompt users to make that first purchase!

"GGs!" exclaimed Arjun (self-plug) after buying a pack of 500 to cover for an upgrade that would have gone on for 48 more hours 😭

However, it's noteworthy that in Player 2 Player (P2P) battles that determine progress (# of 🏆's), the gems are of no avail, and the player level matching system ensures that only equally capable players compete.

Clash of Clan 'attacks' are raids that can lead to an attacking player plundering your pile of gold and elixir. A 48-hour wait for harvesting the right amount of gold can go to naught in the event of a successful attack. A village is protected under a shield from more attacks past this, but a devastating raid can happen again the minute the shield goes away. This psychological monetization genius (it's not the game 🥺, it's the attacker 😡) creates urgency further fueling convenience currency purchases.

As one can guess, a large chunk of CoC revenue comes from Elite-loyal users for whom a leaderboard movement is a matter of pride. Elite users use purchases to beat the pack to new upgrades, defend their positions, and in some cases rush to the top without the 1-year+ ramp up.

As evident from the monetization mechanics of CoC, there are instances, and user segments that are more likely to make an in-app purchase than others. The right nudge (notification/discount/resource bundles) to the right user (a near-miss victim/ a whale user) at the right time can push users over the monetization fence. Product usage information is also used extensively to drive users across the acquisition, activation, and retention loops. Supercell powers these usage-based decisions with a team of data scientists and analysts. Some of their projects include:

Analyzing and operationalizing product usage data becomes a must-have when dealing with a large top-of-funnel of free users - an inevitable characteristic of product-led companies. Canva uses Toplyne to identify which of their millions of free users are the perfect fit for their premium subscriptions. (Self plug alert 🚨)

Here is a summary of learnings that we believe can be lifted and shifted to PLG Companies: