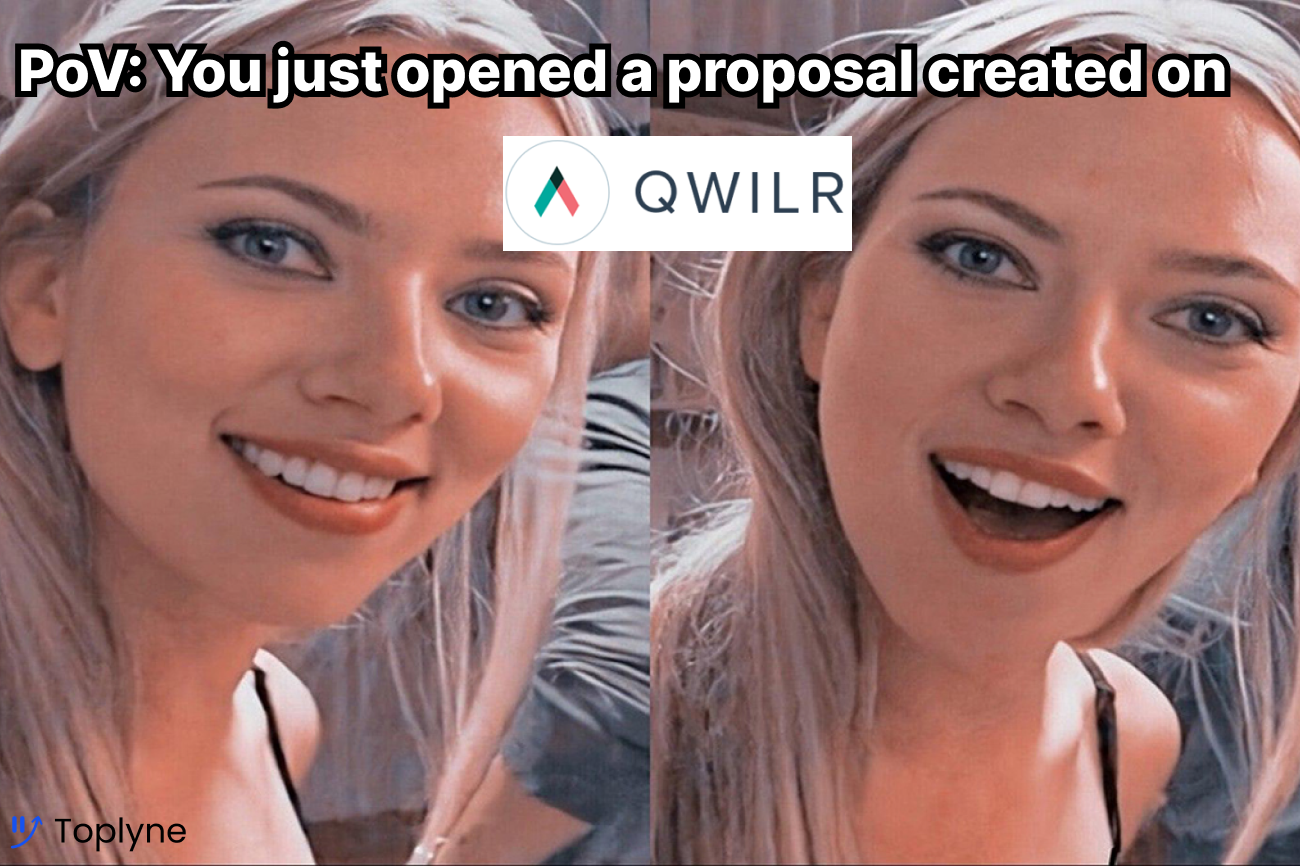 A start-up from sunny Sydney is changing business comms forever with its gorgeous, customizable, and fully web-based business proposal generator

Back in 1477, Archduke Maximilian - of Austrian royalty - made history by orchestrating the first-ever wedding proposal and putting a ring on it.

This was the first betrothal in recorded history where the gent went down on one knee with a diamond ring in hand.

Maximilian may have not known it at the time, but his fancy little proposal set off a chain of events that would change much of the world forever:

Mary (the sweetheart in question and French royalty herself) said yes. Max became the Holy Emperor of Rome. The couple had a boy who eventually became King of France (the popular Philip the Fair). Their union enabled the passage of territories like the Netherlands and Spain into the Hapsburg dynasty and centuries later, helped the Tiffanys of the world to rake in huge profits.

Archduke Maximilian proved that a well-conceived and executed proposal can take you places, be it in marriage, business, or world domination.

The Qwilr story has some interesting and serendipitous roots: 90s Sydney, a music band, and an Aussie teen fresh out of high school with big ideas and talents.

Unlike his friends whose school breaks were spent hitting the beach, Dylan Baskind was booked and busy starting his own online rostering business and performing gigs as the lead band member of The Winter People.

Dylan’s rostering business shut doors in a year, and he took on an advertising gig. That lasted nine months. “Consulting, then, seemed like a viable alternative path. A middle road between creative freedom and a reliable income,” he wrote, recounting what first got him thinking of business proposals.

Working first with local businesses and then bigger ticket clients like product companies, agencies, multinationals, and government projects, Dylan got to experience the full gamut of digital design and coding. Behind his beautiful design and efficient coding, however, was the endless drone of InDesign, Illustrator, Photoshop, Excel, Microsoft Word, and PDF upon PDF.

He would frame the pricing in Excel, the copy in Word, and move them both into InDesign. His clients would then request changes and he’d have to tear it all apart and start from scratch again.

Dylan realized, then, that he simply had to come up with a solution.

"This sucks. This totally sucks and I need to do something about it"

He started building his proposals as web pages and structured a system where he could push out these websites in hours rather than days.

He knew he was on to something when the MD of Saatchi & Saatchi, New Zealand called him one fine afternoon to ask how the hell he had put together a beautiful proposal for them just hours after they had spoken earlier that morning.

Around the same time, Dylan’s childhood friend and long-term follower of The Winter People, Mark Tanner was looking to move back to Australia from his job at Google in NYC, and dive into the world of start-ups.

While catching up with Dylan at a wedding, Mark, who came from a world of Sales could immediately sense how much better the alternative that Dylan was building could be to the incumbents. Mark was sold.

The duo teamed up and set out to build a tool that they hoped would make the existing approach to document creation obsolete, the same way the printing press made the Quill obsolete. Hence Qwilr.

Today, Qwilr is a way for sales and marketing teams to create all of their customer-facing collateral - proposals, quotes, pitch decks, presentations, and contracts - as web pages, rather than PDFs or PowerPoint decks. With Qwilr, S&M teams are empowered to build responsive bleeding-edge webpages per modern design tropes that sync to all their sources of truth.

After launching in 2014, the Aussie company raised $2M in seed funding in 2017 and went on to double Annual Recurring Revenue (ARR) YoY consistently while starting to scale in Europe and the US. After hitting just under $10 million in ARR in May 2020, they closed on a $7.25 million Series A funding round led by AirTree Ventures, as well as Skip Capital and Typeform’s co-founder Robert Muñoz.

File systems built pre-web aren’t interoperable with how the rest of the web works and are not designed for today.

As of today, deals worth more than $1B have been closed on Qwilr by teams at HP, ZenDesk, TikTok, MorningStar, Dropbox, and thousands of other businesses across the globe.

Let’s look at their drivers of growth, starting from the very beginning.

Co-founder Mark Tanner says that the secret to Qwilr’s early success was a marriage of excellent engineering and design plus a “Murder Your Darlings” mindset.

After Qwilr v1.0 was released to the early customers, Dylan realized that he had put together a prototype that was more WordPress and less design tool. The editing experience wasn’t WYSIWYG (What You See Is What You Get) - unless you were a developer.

“But as Bob Dylan says: "If ain't right, it's wrong". Words I do my honest best to live by.” - Dylan Baskind

And so the team killed their darling v1.0 and built Qwilr v2.0 from scratch. It was the best product decision the team would ever make.

Qwilr 2.0 offered the flexibility of customizations to anyone with a computer and an internet connection. And 0 reliance on internal engineering teams.

Qwilr was originally built as a single-player tool targeted at SMB customers. Mark calls this decision to not build ‘Qwilr for teams; the “original sin” that them down 100s of product and Go-To-Market (GTM) decisions. They found themselves selling to micro-businesses, freelancers, and the S of the SMBs.

“Product-Market Fit is like gears in a car. You can’t get to where you want to in first gear. You need to have step changes in your business.” - Mark Tanner

As the momentum started building with strong word-of-mouth and viral drivers among sales teams, the team slowly started “turning the tanker.” The decisions to kill freemium, the cheap plan, double the price bar of the top-tier plan and invest more in Sales soon followed.

The target audience was now clear: it was Sales and Marketing teams.

A third party viewing a created doc is Qwilr’s definition of an activation event. Qwilr measured the merits of a free trial vs. freemium against one core metric: activation rate.

Although today, Qwilr offers a 14-day free trial for new users, the team went back and forth on the free-trial vs. freemium conundrum in the early days.

Switching to freemium, they found that the amount of time a user spent on the app during the first interaction after sign-up was higher in a 14-day free trial vs. a 30-day free trial or a fully freemium model - and often significant in taking users over the hump and to the “aha!” moment. Session viewing times and #clicks proved this hypothesis.

“There’s this funny thing with freemium - if I’ve got it for free, I can just come back any time. There’s no real pressure on me to solve this Qwilr problem now.” - Mark Tanner

Qwilr hadn’t figured out how to solve this problem yet. And so switching to freemium led to a drop in activation rates and further to a drop in conversion rates.

The end result? A dramatic slow-down in growth rates from ~3x YoY to ~80% YoY.

“Free users are viral for other free users. Paid users, even though their virality is not always as high, are much more likely to be a referral engine for other paid users. Every other viral company we’ve spoken to has a similar experience.” - Mark

Mark goes on to say that if the freemium version is a downgraded version of the product, then users’ first impression of the product is not as good as it could be. And that in these cases, a free trial with exposure to the complete feature-set might make more sense for your product.

Qwilr went on to kill their freemium model, and today offers a 14-day free trial and two pricing plans:

Today, Qwilr’s Sales team of AEs and SDRs/BDRs represents ~15% of the total headcount (~70) spread across Australia, Europe, and the United States. Ex-head of Enterprise Sales at Lattice, Jonathon Blackburn was brought in earlier this year (April 2022) and serves as VP of Global Sales.

The early product roadmap was ironed out and Product-Market Fit was found on the back of the thousands of early cold-calls Mark had set up as the co-founder leading the sales motion.

“The founder must be the first salesperson. The reason is… you’re gonna hear ‘no’… a lot. And that’s really important to hear. Because you get to ask why. And you get to tease out what the value is they’re after.” - Mark Tanner, Co-founder

And of course, it helps to have a great tool to draft your sales proposals on.

Qwilr’s early growth engine took inspiration from Typeform (whose co-founder, Robert Muñoz is an investor) and embedded elements of virality into the tool that would drive and boost discovery and early adoption.

Time to Value (TtV) is further optimized through a template gallery of proposals, reports, quotes, and one-pagers, with sales-enablement templates coming soon.

The gallery houses 150+ professionally designed templates that reduce the time taken to activation for users who start out with a blank slate and are hesitant to build something from scratch. A leaf borrowed from the Product-Led Growth (PLG) playbooks of Webflow, Notion, AirTable, and Softr.

New users with the tabula rasa problem are offered further support through Qwilr Academy - a place that houses step-by-step resources and guides to get started, explore features, integrate CRMs & payment systems, and even generic sales tips - through videos and web pages designed on… yep, Qwilr.

After their Series A round, Qwilr brought onboard Ben Mackie, previously of the Atlassian parish as the new head of engineering. He now serves as CTO. Under his leadership over the last year, Qwilr has shown a commitment to a product roadmap that aspires to elevate the level and ease of customer interactions for sales and marketing teams.

Improvements to the e-sign experience (one-click accept, single signature e-sign, etc.), a new pricing suite that lets you present interactive tiered pricing plans and personalizations through account tokens were all announced this year.

Their recruitment and job listing hint at a heads-down focus on an expanded feature-set in the pipeline.

With competition emerging even locally (see above), it’ll be interesting to see how Qwilr evolves over the coming year.

We’re sure it’ll be a thriller. ‘Cause [Michael Jackson voice] this is Qwilr.

Tags
Tools
Share this story:
Thank you! Your submission has been received!
Oops! Something went wrong while submitting the form.
Join 8,000+ growth leaders